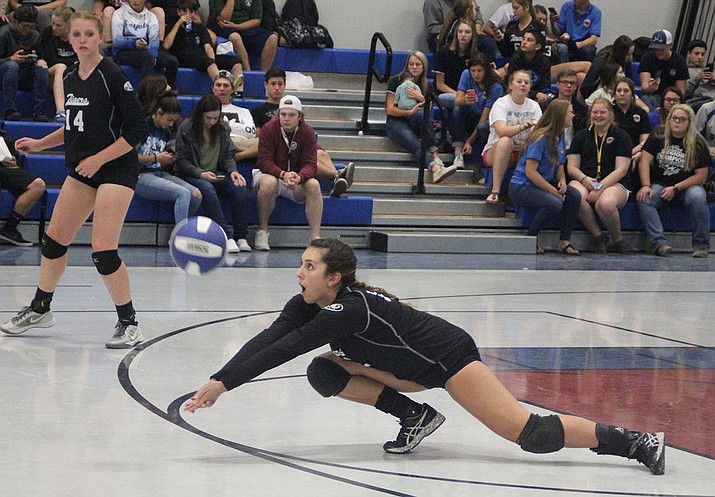 Kingman Academy’s Krystal Howard digs the ball Tuesday against Parker. Howard and the Lady Tigers picked up a 3-1 victory to tally their third straight win.

KINGMAN – The fifth time was the charm for the Kingman Academy volleyball team.

“We’ve never beaten this team as long as I’ve been here,” Academy’s Isabella Anderson said. “It was a good win.”

The Academy made sure that didn’t happen again though, as it never looked back after an 11-4 advantage forced a Parker timeout. The Lady Tigers didn’t let the Lady Broncs inch closer than six points and cruised to victory.

“In the first two sets they were dead on – they came out focused and were on top real quick,” said Academy head coach Bill McCord. “Then they changed their game a little in that third set and got shook up. (But) they re-focused and got back to it.”

A big part of the Lady Tigers’ success was their offensive attack, led by Anderson’s 11 kills. Aspen Jackson followed with 10, while Grace Herbine and Lynsey Day each tallied five kills.

“There’s always some things to work on, but I was pleased with the way they came out,” McCord said. “That was a big thing because we came out sluggish last week and let the other team get on top really quick. That was different today – they were more pumped up and ready to go.”

The Lady Tigers hit the road Thursday for a 6 p.m. contest at 28th-ranked Antelope (7-4, 1-4). The Academy easily took care of the Lady Rams in three sets on Sept. 26, but McCord wants his team not to overlook any opponent as the season winds down.

“I’m trying to put it in their heads that ‘every game means everything – one at a time,’” he said. “So they understand how much every game from here on out means because they want to make playoffs.”