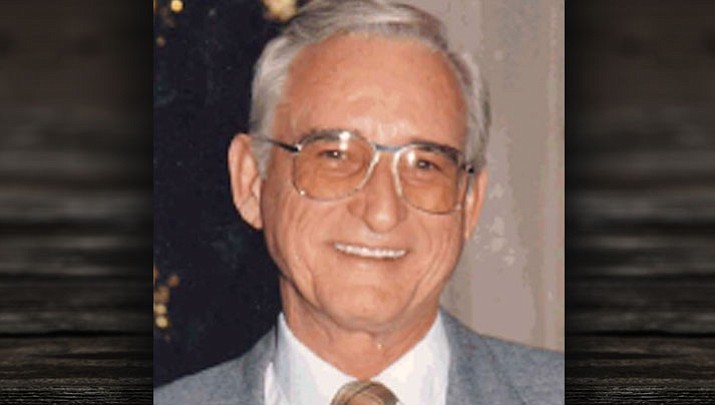 Frank Marshall Nelson Sr., “Marshall” passed away September 20, 2017 in Kingman, Arizona in the comfort of his home with his family by his side after enduring a bout of illness (heart, lung issues, metastatic colon cancer).

Marshall was born September 15, 1935 in Pampa, Texas and spent many years in the Panhandle. As a young man, he and his brother, Charles, made summer visits to his aunt and uncle’s ranch (Nellie and Bob Blake) outside of Kingman, Arizona, and this nurtured his love for Arizona.

In 1955, Marshall married Virginia A. Judd and had a 32-year marriage producing three children: Frank Jr., Susan Michelle (died at 2 years) and Denise.

The family moved to Bullhead City in 1967 where he pursued a long banking career with Valley National Bank (both in Bullhead and later in Kingman).

He was an artist and also enjoyed the outdoors: fishing, target-shooting, boating, golfing, and picnics. He was active in community affairs, interested in helping others and was a founding member of the Bullhead Valley Christian Church. He was a lifetime member of the Elks and a third degree Mason.

In 1976, he moved his family to Kingman. After retiring from Valley National Bank, he pursued a meaningful career in real estate for approximately 27 years where he was known as the “land man.” He loved helping people fulfill their dreams by finding the home or land they wanted.

In 1994, Marshall married Mary Jane (Elwell-Nelson) in a ceremony at Blake Ranch. They enjoyed 23 years of traveling, renovating their historic home, family reunions and backyard barbeques with family and friends, and, of course, always returning home to the Meers family farm in Pampa, Texas every year to visit all the cousins. He held Texas, and his love for his elders dear to his heart.

He and his cousin, H.L., were the family “historians,” regaling us at family gatherings with stories from their childhood on the family farm with their grandparents and all the cousins, riding and roping.

His grandparents (J.F. Meers and Leona Meers) were pioneers of Gray County, Texas. Leona was a founding member of the First Christian Church in Pampa. J.F. was foreman for the Ben Masterson Ranch (a pioneer rancher of the Panhandle) for five years and was responsible for bringing “Bones” Hooks (a famous Bronc-busting cowboy) to Pampa to tame an unrideable black Mustang from Masterson’s ranch. Marshall was proud of his Texas Heritage!

The family expresses heartfelt gratitude to the entire Kingman Regional Medical Center Hospice Team for their extraordinary care in maximizing Marshall’s quality of life. Their wisdom and compassion helped guide and soften the family’s journey. Marshall opted to donate his body to science through the United Tissue Network.

A celebration of life will be announced at a later date. In keeping with his belief in the spirit of giving, memorial contributions may be made to Kingman Regional Medical Center’s Hospice Program at 812 Airway Ave., Kingman, AZ 86401, or a charity of your choice.

He will be tremendously missed by his family and friends for his wise storytelling and keen wit.