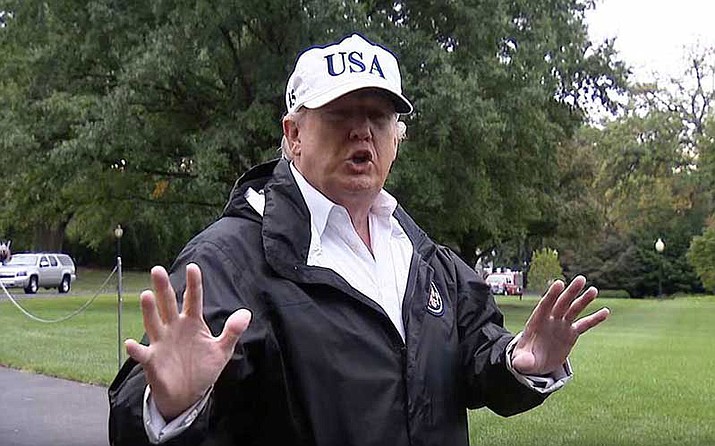 Health Net designed its 2018 rates anticipating the payments would end. Blue Cross Blue Shield of Arizona did not but considered the possibility and said it would remain profitable even if they stopped.

Health Net is raising its rates by less than 2 percent next year. Blue Cross is lowering them by 1 percent.

Although the company didn't respond to inquiries from The Associated Press on Friday, filings with the Department of Insurance outline Health Net's decision to set 2018 rates were made in anticipation of the payments ending. Blue Cross executive Jeff Stelnik said in an interview last week that his company took payments ending into account when setting its rates, although it anticipated they would continue.

"We believe that the rates that we're putting in place are appropriate under either scenario," Stelnik said.

Blue Cross issued a statement Friday saying it was sticking with its planned rate decrease. But it noted the loss of reimbursements adds instability to the market and consumer costs.

Although Arizona rates aren't expected to immediately rise because of the cutoff, the Congressional Budget Office estimated that premiums for a standard "silver" plan will increase by about 20 percent without the subsidies.

The Trump Administration announced late Thursday that it would end the cost-sharing reduction payments immediately. Insurers are required to help lower-income clients with deductibles and co-pays under the Affordable Care Act, and the law also says the government shall reimburse insurers for those costs.

But there is disagreement over whether the law properly provided a congressional appropriation, and Republicans sued to block the payments. Trump adopted that argument in stopping the payments.

Arizona insurers received $75 million in federal payments in 2016. About half of the people covered last year saw lower co-pays and deductibles from that program.

University of Arizona health insurance expert Dr. Daniel Derksen said that while the administration's new directive won't immediately cut coverage in Arizona, it adds to uncertainty in the market from earlier actions. The administration cut the upcoming open enrollment period in half, sharply cut advertising, and cut funding for navigators who assist people with enrollment.

"My guess would be we'll probably see a 15 to 20 percent decrease in enrollment next year," Derksen said Friday. "I think there will be a lot of confusion about whether or not this is still being offered, when I can still get the advance premium tax credit and the other things that have been done to kind of blow up the train track before us."

The reaction among Arizona politicians was split along party lines.

Democratic U.S. Rep. Ruben Gallego slammed the president, saying that instead of working to make health care more affordable, he is "yet again proving that the only people he cares about are himself and those who are as wealthy as he is."

Republican U.S. Rep. Andy Biggs hailed the decision, praising Trump's decision to end the payments and to allow insurance companies to offer lower-cost plans sold across state lines. "While his actions do not take the place of real legislative repeal and revitalization of free market health care, he is doing everything possible to save Americans from crippling health care costs.”

Blue Cross lowering ACA Mohave health insurance premiums
Under health insurance law, established options best for now
Obamacare: Whatever happens, the local economy will be impacted.
27 and on Obamacare? Get ready to pay, and pay, and pay
If you liked your old plan, you can try to get it back