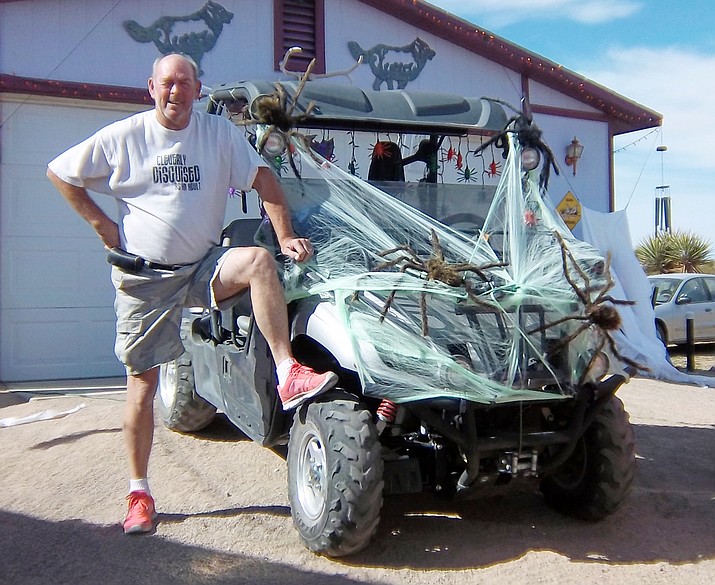 October is not just for celebrating Halloween and passing out candy to visitors; it is also Breast Cancer Awareness Month. Retired 70-year-old U.S. Marine Gunnery Sergeant and Golden Valley resident Butch Meriwether poses wearing his pink tennis shoes next to his Yamaha Rhino that is decorated for Halloween. He says, “It takes a big man to wear pink tennies.” He went out and purchased pink tennis shoes so he could show his support for Breast Cancer Awareness Month, an annual campaign to increase awareness of the disease. Many people don’t realize men can also suffer from breast cancer. Butch says he has a friend in California who noticed he had a lump on his left breast. He went in and they did a mammogram completed and it determined he had breast cancer. They ended up doing a mastectomy on him, which in turn, they believe saved his life because he didn’t ignore the lump. Just because Breast Cancer Awareness Month is only October, an end, everyone should continue be aware of the dangers of this disease and get checkups regularly, especially if a lump is found. (Chris Marie/For the Miner)

The campaign also provides information and support to those affected by breast cancer, and to raise funds for research into its cause, prevention, diagnosis, treatment and cure.

There’s a common misconception when people think about breast cancer is only women suffer from this potentially life-threatening disease. That can be no further from the truth!

The American Cancer Society's estimates for breast cancer in the U.S. for 2017, there will be: about 252,710 new cases of invasive breast cancer will be diagnosed in women and that more than 40,000 women will die from breast cancer this year although death rates have been decreasing since 1989. The society says women under the age of 50 have experienced larger decreases and they are thought to be the result of treatment advances, earlier detection through screening, and increased awareness.

Men diagnosed with breast cancer at an early stage have a good chance for a cure. Still, many men delay visiting their doctors if they notice one of the usual signs or symptoms, such as a breast lump and for this reason, many male breast cancers are diagnosed when the disease is more advanced.

Both males and females can experience painless lumps or thickening in their breast tissue, changes to the skin covering their breast, such as dimpling, puckering, and redness or scaling. Other changes that may become evident are the nipple begins to turn inward and there may be a discharge from nipple.

Breast cancer is the most common cancer in American women, except for skin cancers. Because women’s bodies are constantly changing, they must not ignore certain signs that may indicate a presence of cancer. In addition to the aforementioned signs for both men and women, Both men and women should pay attention if lymph has swollen or is sensitive. Lymph nodes are small, pea-shaped glands that are located throughout the body and most changes in them come from common infections. However, some cancers, including breast cancer, leukemia and lymphoma, can also case lymph nodes swell and/or become tender.

The most important thing that must be stressed is most breast lumps aren’t cancerous, but if a lump is found, the best thing to do is visit a healthcare professional for an evaluation. Doctors will normally do a physical exam and may also have tests like a mammogram or a biopsy (when doctors remove a tiny piece of tissue for testing).

According to healthcare professionals, people need to pay attention to their bodies so they can notice when something's different. New symptoms indicate something may have changed in their bodies.

If anyone notices they have any persistent signs or symptoms that worry them, they should make an appointment with their doctor or healthcare provider.

It is better to be safe than sorry because early detection of cancer can possibly lead to a cure.

Breast cancer campaigns might be pink, but men get it too
Local Health Column: From early diagnosis to cure
Beyond October: Things to be aware of all year about breast cancer
Breat Cancer Awareness Month<BR>A survivor's advice: Look out for No. 1
Facts & Figures: Everything you ever wanted to know about breast cancer
Event Calendar