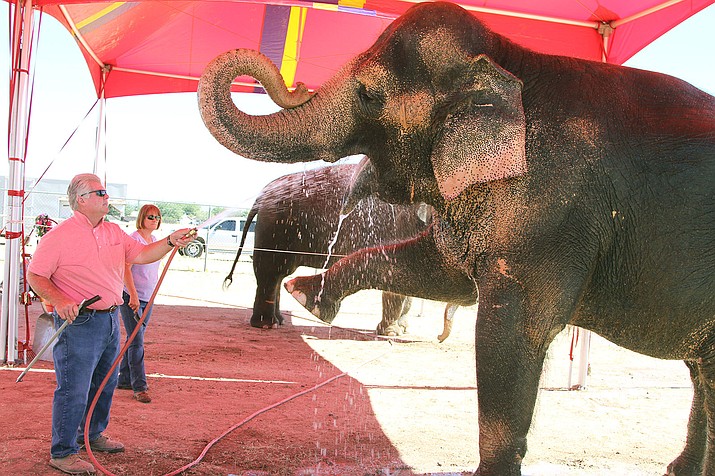 Gary Johnson and Joanne Smith give Tai the elephant a bath Thursday at the Mohave County fairgrounds last year. City Council adopted a resolution opposing inhumane treatment to animals, it did not approve an ordinance against circuses.

KINGMAN – Inhumane treatment of animals comes in many forms, and while the City Council adopted a resolution Tuesday opposed to such treatment, it stopped short of adopting an ordinance prohibiting circuses from coming to town.

The proposed ordinance would have banned traveling animal performances, with an exception for rodeos, FFA and 4-H exhibits and other educational activities.

The Council voted 6-1, with Vickie Kress opposed, to approve the resolution and deny the ordinance, and to have staff look at restrictions on circus performances, including possibly denying a permit to circuses with documented mistreatment of animals.

City Attorney Carl Cooper said the Council had the option of supporting the resolution, which basically states that the city is against inhumane treatment of animals traveling with circuses, without banning circuses.

He said he received comments both pro and con, and his intent was to try and parse the ordinance so it didn’t affect Arizona Game and Fish activities, dog shows and other events involving animals. His resolution was modeled after a number of others nationwide.

The issue became a hot point when elephant rides were offered at the Mohave County Fair last year. County supervisors considered a similar ban earlier this year, but decided animal abuse was already prohibited by state laws and asked their attorney to look into the matter.

Cooper said he was contacted by owners of snakes and hawks and various exotic animals who were concerned about the ordinance.

“So I cut it down to cover the big ones, the horror treatment that you heard about in the circus,” he said. “You have that dichotomy between the circus and the rodeo.”

During public comment, a woman told City Council that she had about 300 people staying at local motels for a rabbit show and they were afraid to go because of protesters at the circus.

“I went to the circus. I asked to see the stalls in back of the trailer and I’m ashamed to say that some kids in Kingman don’t have such nice homes,” she said. “I’ve had people tell me it’s inhumane to put collars and leashes on dogs and have them in a car.”

Another citizen said he spent a day with the elephants at the fair and observed that they had an hour’s rest between rides. They’re regulated by U.S. laws, he added.

He also mentioned animal rights’ activists “stacking” ordinances such that the Rose Bowl now has to be approved by Pasadena’s city council.

“If someone drives by Keepers of the Wild, or Bearizona in Williams, they might think that’s bad,” said another man. “Let the state and federal government make the rules.”

Jonathan Kraft, owner of Keepers of the Wild animal sanctuary in Valentine, was one of the strongest advocates for the ban, having shown videos of animal abuse at the county supervisors’ meeting in June.

“There are different forms of abuse,” he said. “Keeping large animals in a 5-foot-by-6-foot cage is abuse.”

Kress mentioned that when she voted against the motion to deny the ordinance.

Council revisits exotic animal usage in circuses
Community View | Animal acts in circuses are antiquated and belong in the past
Letter | Danette Zachary: Council’s cowardice in the face of animal abuse allows cruelty
The circus is coming to Kingman, but not everyone is excited
Prohibiting exotic animal performances: A slippery slope or the right move for Kingman?
Event Calendar