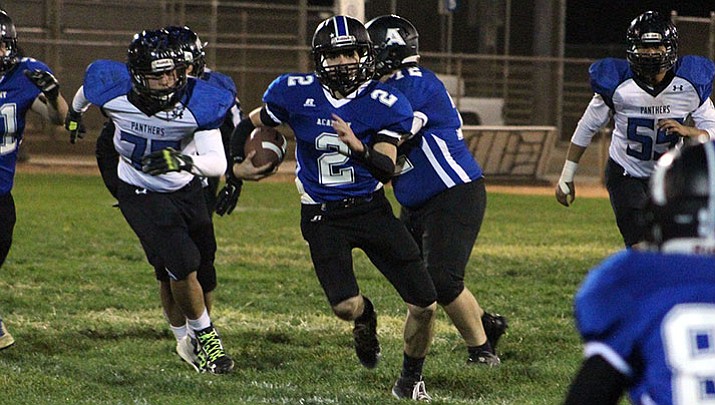 KINGMAN – It was a familiar situation for the Kingman Academy High School football.

Trailing late in the fourth quarter Friday night, Tigers quarterback Kekoa Makaiwi-Stroup found go-to receiver Gabe Imus with less than a minute remaining in the game to clinch a 38-33 win over Paradise Honors.

“It’s a great feeling,” Imus said. “I knew if I could get across on the slant, it would open up. I connected with Kekoa’s eyes and that’s what happens.”

While Imus once again came through in crunch time for the 19th-ranked Academy (6-3, 4-1 2A Central), it was Stevie Wusstig that kept his team in the game with 104 yards rushing and three touchdowns.

“I see the gaps and I have great teammates,” Wusstig said. “They make their blocks for me and I’m just glad I can get around them. They do their job and I do mine.”

Wusstig helped make sure the Panthers (3-5, 2-2) didn’t ruin the Tigers’ playoff chances as a loss would have almost surely eliminated them from contention. Now the Academy needs some help next week as a Tonopah Valley loss to Paradise Honors would clinch the region for the Tigers.

“Obviously we’ll be rooting for Paradise Honors,” said Academy head coach Dan Stroup. “Nothing against my good friend Dustin (Johnson) at Tonopah, but we’d love to be a region champ.”

The Academy found itself in a back-and-forth battle in the fourth quarter that featured a combined 39 points. The Panthers struck first with 8:26 left in the game and then each team traded touchdowns until Makaiwi-Stroup found Imus for a 30-yard score with 56 seconds remaining to seal the win.

“Once Kekoa let it go and where Imus was running, I knew it was six points,” coach Stroup said. “What’s nice about our kids is they work hard and believe. The kids have such confidence in each other. If they have a few seconds left, they can execute a touchdown.”

Makaiwi-Stroup went 11-of-20 for 212 yards with two touchdowns and two interceptions. He also finished with a 14-yard rushing touchdown. Imus caught 7 passes for 142 yards and his game-winning score, while Hayven Potter finished with 48 yards receiving and a touchdown.

Joey Martin finished with seven rushes for 50 yards as the Tigers racked up 168 yards on the ground and four touchdowns.

Defensively, Tyler Wheeler finished with 16 tackles and a forced fumble, while Tyler Balluff had 11 stops and a sack. Martin added nine tackles and a recovered fumble, followed by Julian Lovato-Cordero with eight tackles and Adrian Felix with seven tackles and a pass deflection.

The Academy ends the regular season at home Friday with a 7 p.m. non-region contest against Arete Prep (2-4 2A Independent).