Teachers lash out at Gov. Ducey for pay raises to aides 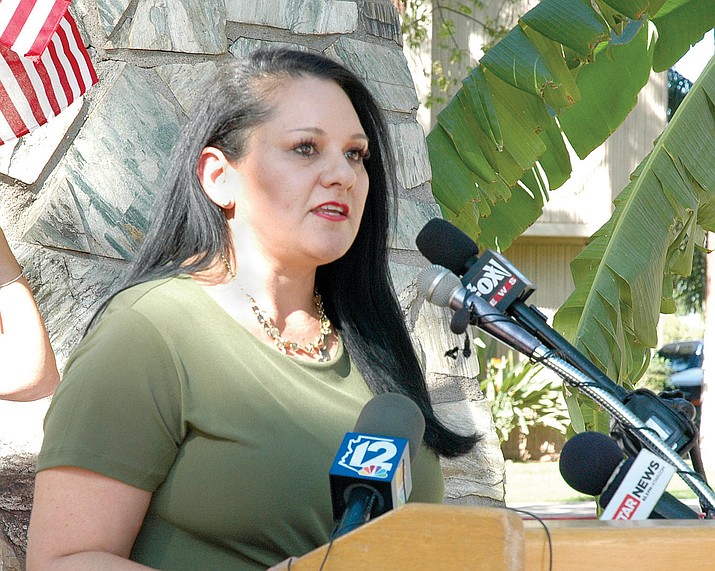 PHOENIX – Arizona teachers lashed out Friday at Gov. Doug Ducey for giving double-digit pay hikes to his staffers even as he was proposing an across-the-board pay hike for them of just 0.4 percent a year for the next five years.

"It's outrageous, it's demeaning, and it shows a lack of leadership and decisiveness on the part of the governor,'' Arizona Education Association President Joe Thomas said.

He acknowledged that legislators were a bit more generous, providing a 2 percent raise over two years. But Thomas said that still only amounts to an additional $300 a year for the average teacher in take-home pay.

The demand for higher teacher salaries is not new.

Jim Swanson, who co-chaired an education task force with Ducey, is pushing for a one-cent increase in state sales taxes. That would raise about $1 billion a year, with at least some of it set aside for raises for Arizona teachers who are among the lowest paid in the country.

And state School Superintendent Diane Douglas has her own plan for a 0.4-cent sales tax increase, with three-fourths of the $400 million that would be raised earmarked for what she said would be an 11-percent increase in teacher pay.

Ducey is opposed to any plan to increase taxes, whether for teacher pay or anything else.

What's new is an Arizona Republic story detailing the average pay hike Ducey gave staffers since he took office in January 2015 was 11 percent, with 44 staffers getting raises of 20 percent or more.

The news also comes on the heels of a report that showed school districts this year unable to fill more than 1,300 vacancies four weeks into the school year and that more than 500 teachers have resigned so far this year, some simply by abandoning their positions and walking away.

"Let's have a 20 percent raise in this year's budget for all of our teachers in the state,'' Thomas said.

Thomas said a 20-percent raise would cost about $750 million, money he conceded does not exist in the current budget. What that means, he said, is coming up with a revenue source.

And given the reticence of the governor and the Republican-controlled Legislature to increase taxes, Thomas said that means taking the case directly to voters, perhaps as soon as the 2018 general election.

He balked at falling into line with Swanson or Douglas, saying he's not necessarily convinced the dollars should come from a sales tax. Thomas said the AEA will work with others to figure out what is the best source – and what would be most acceptable.

But he made it clear that higher taxes are really the only option.

"The money should come from the people of Arizona,'' he said. Thomas said the economy has improved to the point where a tax hike would not cause economic harm.

Whether voters would go along, however, is unclear.

A 2012 ballot measure would have made permanent a temporary one-cent hike that voters had approved two years earlier to get Arizona through the worst of the recession. But that failed by a margin of 64-36, in no small part because Ducey, then state treasurer, led the campaign against it, which much of his funding coming from a group linked to the Koch Brothers.

Press aide Patrick Ptak defended Ducey's opposition to any tax increase, even one for teacher pay.

"That's a commitment he made even before taking office,'' he said.

On the question of pay hikes, Ptak said the news report presented "a lopsided and distorted view of reality.'' He defended what Ducey is paying to agency chiefs he hired, saying their salaries are comparable to what is paid by other government entities.

As to Ducey's own staff, Ptak said the office budget has remained at $6.8 million since the Brewer administration. He said there are fewer staffers within the office, with the raises cited in the news story based on people having different jobs or taking on additional responsibility.

Marisol Garcia, a social studies teacher in the Isaac Elementary School District, said that's no excuse. She said in the past six years her average class size has increased from 27 to 39, with the latter figure being almost unmanageable.

And Garcia said salaries are so bad that she, as a single mother, found out when she started to teach that she qualified for federal subsidies to allow her child to get his lunch at school for a reduced rate.

"This is one of the most humiliating things I could go through,'' she said, with the government concluding that with her bachelor's and master's degree she needed financial help. Garcia said she turned down the offer.

Thomas sidestepped a question of whether at least part of the blame for low teacher pay can be laid at the feet of local school board members who chose to use their Proposition 123 money for other priorities.

But he argued that money in the ballot measure was to settle the lawsuit filed by school districts against the state for failing to comply for years with a mandate by voters to increase state aid each year to compensate for inflation.

And there's one other thing: Most of that cash came not from the state general fund but instead from a special trust fund already earmarked for education.