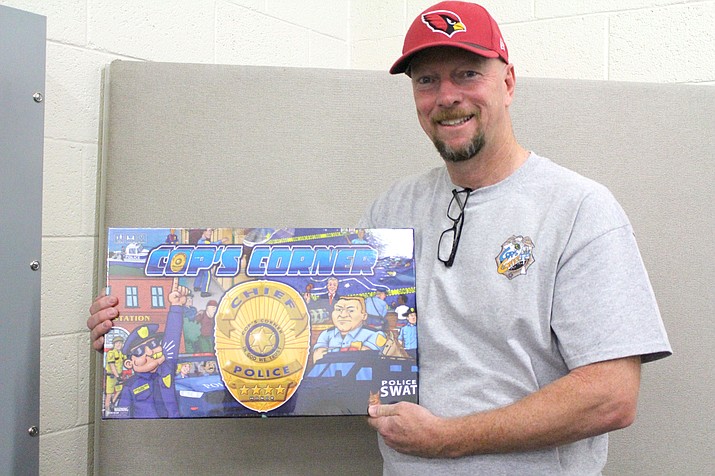 Paul Martin of Kingman shows the Cop’s Corner board game that he invented.

Abby, a sixth-grader at White Cliffs Middle School, knows a little about police work from her father, who’s a police officer, but she’s learning more about his profession through “Cop’s Corner,” a board game invented by local resident Paul Martin.

The objective of the game is work your way through eight police ranks until you reach chief of police. Each player rolls the dice and moves around the board, landing on spaces for training, crime scenes, take a suspect to jail, or subpoena for court.

“I wanted people to have a better understanding of what police do and some of the laws they are expected to enforce,” said Martin, a Kingman resident since 2009 and formerly with the Orange County (California) sheriff’s department.

He awoke from a dream about the game five years ago and wrote down details for Cop’s Corner in the middle of the night.

“It was like a God download,” Martin described. “I was reminded of Romans (chapter) 13 where it talks about how we are to submit to authorities, honor and respect those that God has put in place on our behalf. To say the least, I was very excited about the whole concept.”

It took 30 minutes for Martin to lay the game out on the inside of a cereal box, and then he started working on a prototype. He invited friends over to play the game.

He hired a patent attorney to find out if there was another game like it,and got a copyright on the game. Board Game Manufacturing, based in Pahrump, Nevada, designed the first edition.

“It’s competitive on the right kind of level,” McKowan said. “I think it teaches them different things police officers have to do and things they have to watch out for.”

The game is available for kids to play when they get their work done and have some free time, the teacher said.

“It gives them a mental break and allows them to interact without technology. A lot of them never played board games,” she said. “I said, ‘No electronic devices,’ and the kids were like, ‘Good.’”

Martin said his goal was for the game to be fun, lasting about 30 minutes with the option of shortening it for younger kids. It had to be affordable, and have educational value.

“I did not cut corners on anything. I wanted people to get the best game for their money that you could play for years,” Martin said.

“I had no idea that creating a game was so much work and such a slow process,” he added. “Even with the game done, it is challenging doing the business side. My biggest challenge is getting the word out.”

Most large corporations won’t touch the game without two years of success and financial records, Martin noted. So far, he’s invested about $60,000 producing the game, and has given away more games than he’s sold.

Martin sent a game to President Donald Trump, along with Secretary of Education Betsy DeVos, and Patrick Burke, head of the Washington, D.C. Police Association, who is using the game in his cadet program.