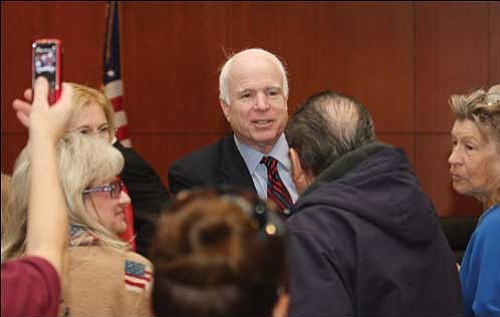 WASHINGTON — Republican Sen. John McCain left no doubt Monday that he was thinking of President Donald Trump as he criticized the draft system during Vietnam for forcing low-income Americans to serve while the wealthy could avoid war with a doctor’s note.

McCain, a former Navy pilot and prisoner of war, stopped short of labeling Trump a “draft dodger” for getting five draft deferments. But the senator’s comments came with Trump already immersed in controversy over how he honors U.S. troop deaths, and underscored the remove between the billionaire president and the military system he now controls as commander in chief.

McCain’s criticism also continued a long-running clash between the two men on the eve of a visit by Trump to Capitol Hill on Tuesday to court Senate GOP votes for his tax plan, a meeting that could contain more than a few awkward moments.

“I don’t consider him so much a draft dodger as I feel that the system was so wrong that certain Americans could evade their responsibilities to serve the country,” McCain said on ABC’s “The View.” He was being pressed about comments in a C-SPAN interview aired Sunday where he lamented that the military “drafted the lowest income level of America and the highest income level found a doctor that would say they had a bone spur.”

One of Trump’s deferments came as a result of a physician’s letter stating he suffered from bone spurs in his feet. Trump’s presidential campaign described the issue as a temporary problem.

McCain, meanwhile, spent 5½ years as a prisoner of war after his plane was shot down over North Vietnam in 1967. Yet during last year’s presidential campaign Trump said McCain was not a war hero because “I like people who weren’t captured.”

The senator made clear during Monday’s interview that he had been referring to Trump in making his C-SPAN comments. When one of the hosts remarked that people thought he was talking about Trump because the president had sought a medical deferment, McCain interjected, “More than once, yes.”

McCain was asked to describe his relationship with the president. “Almost none” he simply said.

The six-term Arizona lawmaker, battling brain cancer at age 81, made his appearance on “The View” in honor of his daughter Meghan McCain’s birthday. She recently joined the daytime talk show as one of its panel of co-hosts. The White House declined to comment on McCain’s remarks.

The tacit criticism reflected the ongoing tension between Trump and McCain, which began during last year’s campaign and has flared on and off.