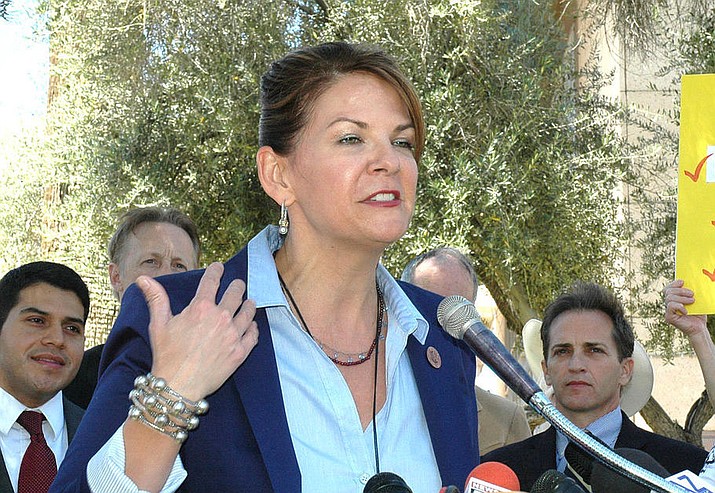 The field appears to be opening up after Flake announced he wasn’t going to seek re-election.

The two former Breitbart reporters ran Ward’s campaign from May until September with Dustin Stockton serving as chief strategist and Jennifer Lawrence as press secretary. The two join a growing list of campaign staffers who have left or been fired dating back to Ward’s run for Sen. John McCain’s seat in 2016.

“Jeff Flake’s announcement is great news for anyone who supports the president and terrible news for Kelli Ward,” Stockton said in a release. “The chances that Republicans will hold on to Flake’s seat just went up dramatically. Ultimately this is going to compel some very strong candidates to get off the sideline.”

Without Flake, Stockton added, this could turn into a three or even four person race.

“We’re looking forward to working with a non-fringe candidate who will actually defeat Kyrsten Sinema and stay true to the America first agenda,” he said.

This is not the first criticism that Stockton and Lawrence have leveled against Ward.

On Oct. 17, Stockton and Lawrence issued a statement “apologizing for propping up” Ward and her “blind ambitions.”

According to an interview with The Daily Beast, when Stockton and Lawrence joined Ward’s campaign they thought she was set to drain the swamp.

“After a while, we saw her bringing in people from the political consultant class,” Lawrence told The Daily Beast. “Now, Arizona Republicans are going to get at least one other candidate who won’t sell them out in pursuit of their own ambition.”

Ward declined to comment on Stockton and Lawrence allegations.

On the list of Republican members of Congress believed to be interested in running for Flake’s seat are Republican representatives Martha McSally from Tucson, David Schweikert from Phoenix and Paul Gosar from Prescott.

At least one in this group, Rep. Gosar, said that he’s not interested.

“Although the state needs a strong conservative at the helm, Congressman Gosar will seek re-election for his seat in the House of Representatives in 2018,” said Faith Vander Voort, Gosar’s spokeswoman.

“His heart lies with Arizona’s Fourth Congressional District and as one of our nation’s most efficient members of Congress, the chairman of the Western Caucus, and the chairman of the Natural Resources Subcommittee on Energy and Minerals. The congressman is confident that he can make a difference for our country in the House, and he will continue to do so in that capacity.”

McSally and Schweikert’s representatives could not be reached for comment.