Not even desert safe from wildfire threat in blazing West 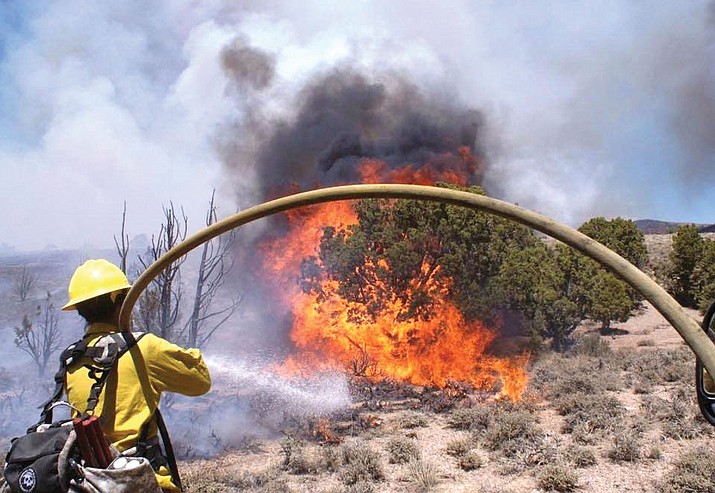 Arizona isn’t safe from the threat of wildfires. Crews are currently fighting fires in triple-digit heat across the West.

RENO, Nevada (AP) – Not even the desert is safe from the threat of wildfires across parts of the West where crews are battling wildland blazes in triple-digit heat.

One of the scores of wildfires burning from California to Montana temporarily shut down the main travel route to the Burning Man festival in the Black Rock Desert about 100 miles north of Reno.

About 100 firefighters remained on the lines Thursday night after air tankers dumped retardant on flaming sagebrush and invasive cheat grass in the high desert about 40 miles south of the counterculture celebration where the mercury was expected to top 100 degrees Friday.

In California, temperatures exceeding 110 were possible in interior valley areas east of San Francisco Bay on Friday and Saturday afternoon. Among high numbers shown by various models, Livermore could range from 111 to 116 degrees.

Fires were burning from near Las Vegas at the old nuclear test site to 60 miles south of the Canadian border in Montana's Bears Paw Mountains, where five cabins burned and five other structures were destroyed. Another 130 buildings remained threatened last week in the mountains south of Havre.

Thousands of people have been driven from their homes in Oregon and hundreds in California, where a blaze burned 10 homes and threatened 500 more near a hard-hit community and another kept a popular road to Yosemite National Park closed.

In southeast Montana, another wind-driven wildfire ripped through parched forest and grasslands last week, threatening 35 homes and structures and forcing the evacuation of an undetermined number of residents scattered in the area. The fire that started in the Custer National Forest about 35 miles northwest of Broadus on Wednesday burned at least 47 square miles in a single day.

In Nevada, more than 70,000 people were expected at the Burning Man art and music celebration in the Black Rock Desert by the time it culminates Saturday night with the burning of a towering effigy. The vast majority got there by a state highway that was closed for several hours because of the fire.

The lightning-sparked fire has burned about 80 square miles and is about 40 miles south of the festival. Seven ranches were threatened, and full containment isn't expected for a week. But there was no immediate threat to the festival, and there were no reports of injuries.

"It's not close to Burning Man at this time," Interagency Fire spokesman John Gaffney said. "There's a considerable distance between the fire and the festival. At this point, the goal is to keep the road open as much as we can."

Gaffney said the heat, expected to hit 100 degrees again, was one of the biggest concerns for crews fighting the flames by the air and ground. It's chewing through brush that's 1 to 2 feet high, he said, and high temperatures were expected through the weekend.

Burning Man spokesman Jim Graham said in an email that the local festival airstrip, which is built each year, is open and the celebration was continuing as scheduled. "At the moment there is no impact," he said.

Other fires in Nevada closed a 65-mile stretch of highway just south of the Nevada-California line about 80 miles south of Reno and burned a remote part of the vast former nuclear proving ground outside Las Vegas.

In Northern California, Gov. Jerry Brown has declared a state of emergency for a rural wildfire that has forced the evacuation of 2,500 homes.

Brown's declaration for the fire in Trinity County on Thursday night says the blaze has destroyed multiple homes. But neither he nor the U.S. Forest Service have said how many.

The fire that started Wednesday night for unknown reasons is burning out of control in extreme heat and very dry conditions.

Elsewhere in California, more than 1,000 firefighters were able to slow the growth of a nearly 5-square-mile wildfire overnight near the town of Oroville, an area already hard-hit by fire and a massive evacuation earlier this year caused by damage to sections of the nation's tallest dam.

It was partially contained, but about 500 homes remained in its path.

Fires also burned near Yosemite National Park, evacuating nearby towns and keeping a popular road into the park shut down. A Forest Service battalion chief, 47-year-old Gary Helming, was killed in a traffic accident while making the 200-mile drive home from fighting the fire.

Air quality from wildfire smoke is a problem in Montana and Oregon, where athletic events – from kayaking and half-marathons to high school football games –have been postponed in the outdoors-loving state.