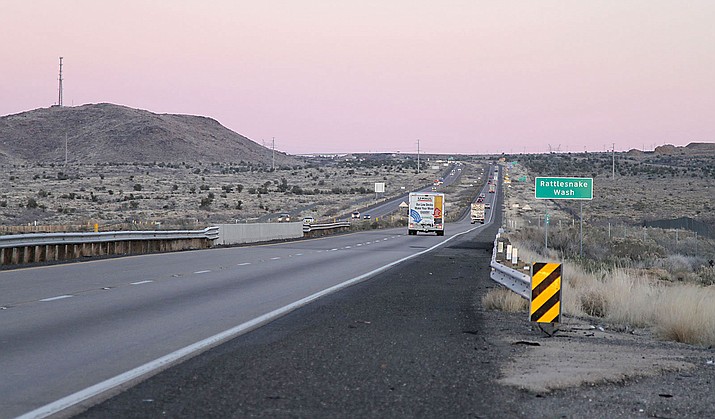 The proposed Rancho Santa Fe Parkway would be in the Rattlesnake Wash development.

KINGMAN – Everyone needs to play nice. At least that’s what the Rancho Santa Fe Parkway subcommittee looking into the development of a Rattlesnake Wash interchange thinks about the possibility of the city adding two interchanges on Interstate 40.

Timko liked Turney’s proposal, but stressed that the two are not mutually exclusive and both projects can be done. Turney was worried about waiting too long before going ahead with the Kingman Crossing project, to which Timko agreed.

“I think if we came together in a joint workshop and talked about those concerns, I don’t think timing would be a problem,” he said. “There’s plenty of work to get done to get both of these projects moving.”

Latoski pointed out that current truck routing to the airport and KRMC’s Hualapai Campus being a safety hub for highway users and city residents could be “difference makers” in the Rattlesnake Wash development.

“These interchange projects and combining them into a singular project really speaks to enhancing mobility,” Latoski said.

“We predict the largest economic impact would occur two years after the interchanges were built,” Riley said.

Timko said Kingman Crossing will bring in retail development, but Rancho Santa Fe Parkway will bring in much needed jobs development. KRMC would meet their funding curve when the construction jobs that provide commercial insurance arrive.

“I think if we see the two as mutually supportive instead of mutually exclusive, we can sit down and work out a way to get both done,” Timko said.

He didn’t have a problem with Kingman Crossing starting first since Rattlesnake Wash would have to wait for ADOT’s funding plan.

“As long as we work out the timing differences, I don’t see the two as competing, but as supporting each other,” Timko said.

He’s kept up on the groveling over the increased sales tax for local infrastructure improvements. He was astonished that the same people who think a half-cent sales tax for roads is good, but the same tax for 62,000 new jobs over the next 30 years is bad and reminded those in attendance that sales tax (aside from fees and fines) is all the city has to pay for improvements.

“The weight of the government is sales tax, and you might as well recognize that,” Timko said.

Finance Director Tina Moline briefly broke down who pays which taxes and where those taxes go. Councilman Travis Lingenfelter agreed that sales tax is necessary.

“We need that money,” he said. “We have to take care of our infrastructure. That’s how we pay for things.”

Timko said neither project has the needed analysis to go forward, but it’s time to stop seeing the interchanges compete against each other and work out the phasing issues.

“Start seeing them for what they are – the right thing for the community,” he said.

“We need to put aside past differences and look at what’s better for the community and see that these projects support each other, not compete with each other,” Timko said.

Council made direction to move forward with more workshops.