Bulldogs rally in fourth, but fall to Page 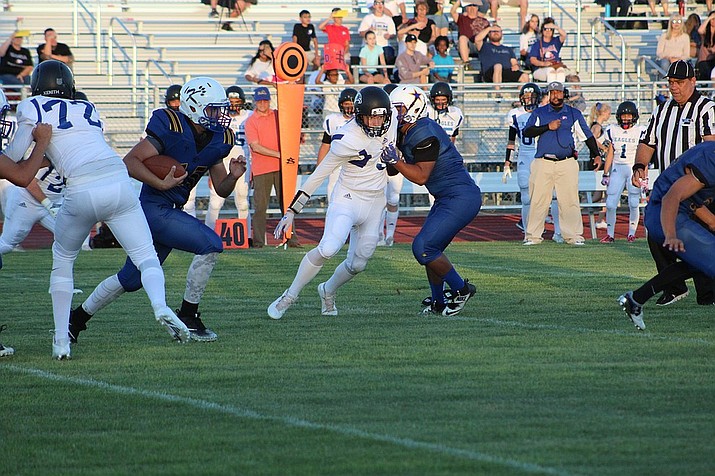 Kingman’s Darrell Mitchell rushed and passed for a touchdown Friday in a 44-18 loss to Page.

KINGMAN – The Kingman High School football team scored two touchdowns in the fourth quarter Friday night, but it wasn’t enough in a 44-18 loss to Page at KHS.

“Our kids have grit – they played their hearts out from start to finish,” said Bulldogs head coach Cam Wierson. “With the firepower they had, Page should have beat us by 50. I’ve coached 14 games here so far, and this was the first time our kids performed without fear and with intense aggression for all four quarters.”

Kingman (1-3) finished with 185 yards of total offense, highlighted by Darrell Mitchell’s 135 yards through the air. The junior quarterback threw a passing touchdown to Danny Dias and rushed for a score. Austin Dias also had a rushing touchdown and finished with 54 yards on the ground.

The Sand Devils (2-2) jumped out to a 14-0 advantage before Austin Dias punched it in from 12 yards out with 2:38 left in the first half. The two-point conversion failed and the Bulldogs trailed 14-6.

Kingman was down 22-6 at halftime and saw its deficit increase to 28-6 after three quarters.

The Bulldogs opened the scoring in the fourth quarter with Mitchell’s six yard touchdown to inch within 28-12. Page responded with consecutive scores to take a 44-12 advantage, but Kingman didn’t go down without a fight. Mitchell found Danny Dias for a 54-yard touchdown to cap the scoring.

“These young men that are fighting through this awesome challenge of being a Bulldog football player and learning virtues that most people don’t have the courage to even attempt,” Wierson said. “I couldn’t be more proud of this group. They’re building themselves into courageous and gritty young men.”