NACFD recalls fall to the wayside 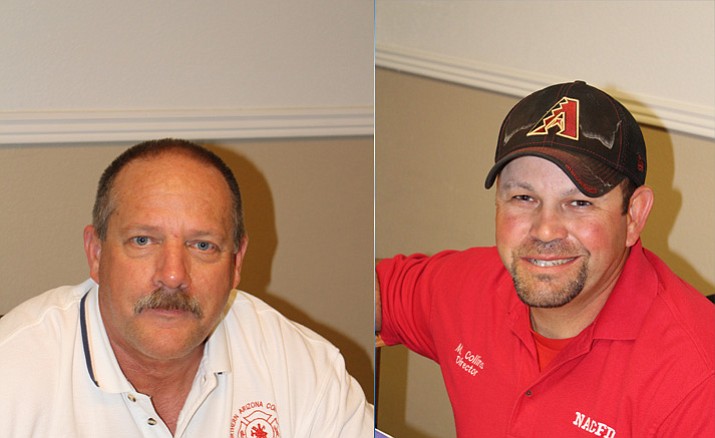 KINGMAN – The recall petition for Northern Arizona Consolidated Fire District board members Mike Collins and Jim Bailey has been pulled due to “voter apathy,” one of the citizens behind the recall said Thursday.

Petitioners needed to gather at least 892 signatures of registered voters in the district for a recall election.

“We fought voter apathy and found a surprising number of people in the district are not registered voters,” Valle Vista resident Rick Veradt said. “However, we feel that with the numerous violations of state law we have uncovered, coupled with the current criminal investigation, both individuals will soon be off the board.”

Veradt said a previous petition filed in March to recall board members Patti Lewis and Vic Riccardi has also failed.

The board members have been at odds with each other since the hiring of interim Fire Chief Wayne Eder in March.

Eder and board members Sue Wilkins and Riccardi have been indicted for conflict of interest regarding a $1,357 payment to Riccardi’s automotive repair shop in Valle Vista for diagnostic work on one of the district’s fire trucks.

The case is scheduled to be heard Sept. 18 by Judge Rick Lambert.

The recall petition for Lewis and Riccardi claimed the board majority has “wasted taxpayer dollars by hiring an interim fire chief who was responsible for wasting millions of taxpayer dollars.”

The recall effort against Collins and Bailey is based on a “conspiracy” to defraud taxpayers by closing fire stations, purchasing a building at 2600 Northern Ave. for $500,000 during the recession, and failure to make needed repairs on fire trucks.

(Correction posted Sept. 11, 12:05 p.m.: In our Sunday, Sept. 10 edition of The Kingman Daily Miner we incorrectly listed a member of the Northern Arizona Consolidated Fire District board of directors as someone who had been indicted for conflict of interest. The indictment names Fire Chief Wayne Eder and board members Sue Wilkins and Vic Riccardi. The indictment alleges a conflict of interest regarding a $1,357 payment to Riccardi’s automotive repair shop in Valle Vista for diagnostic work on one of the district’s fire trucks.)