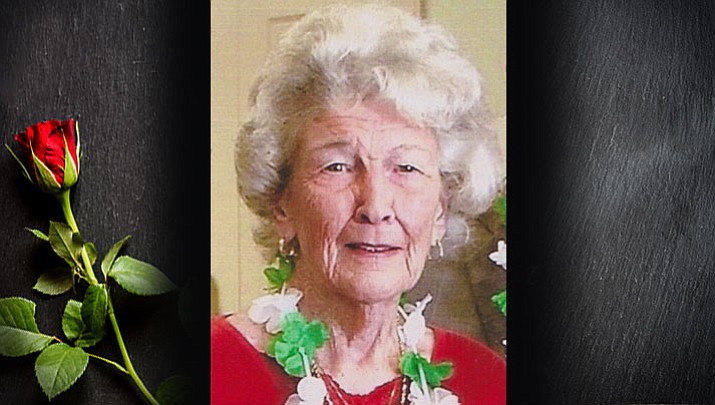 Alda (Aldee) Rosine Haack Campbell went to be with her Savior on September 2, 2017 in peace and comfort with family present after a month in the hospital (KRMC), Gardens Care Center and finally Joan & Dianne Hospice House in Kingman Arizona.

Aldee was born to Gustaf and Anna (Meine) Haack at home on the family farm near the small town of Whittemore, Iowa on November 19, 1923.

She was proceeded in death by her parents, Gus and Anna Haack, and all her siblings; Walter Haack, Louise Hainzinger, Edna Alt, younger twin sisters Agnus Hantelman and Alice Spear, and her two daughters, Barbara Louise Campbell (in a car accident in 1967) and Shauna Dee Campbell (to cancer January 1, 2017).

Aldee is survived by her husband V.R. Bob Campbell and 23 loving and caring nieces and nephews and great- ones too.

Confirmed in the Lutheran Church and educated in a rural one room school in Iowa, Aldee worked several years for local farmers as in-home domestic help until she left Iowa at age 18, relocating to San Diego, California in the early stages of World War II. Once there, Aldee found work as an au pair for a family who had a young son with polio, then as a U.S. postal clerk in National City, California until 1946.

Aldee met her husband-to-be Bob Campbell in November 1945. They were married October 13, 1946 and would have celebrated their 71st anniversary this coming October.

Following their marriage, Aldee became a homemaker and put much effort in church and community service: Assistance League of Contra Costa County, California; PTA mom through all grades; Gold Country Meals in Nevada County, California directing the program’s service of local elderly; care and fellowship as a deacon at Kingman Presbyterian.

Aldee loved bowling, touring in antique cars, restoring and making replica antique clothes; but gardening and making things grow was her absolute passion. Known to have a green thumb, she was a member and officer of Chicago Park garden Club in California and was a founding member and past president of the Cerbat Garden Club of Kingman, Arizona.

Throughout 71 years of marriage, Adlee was a faithful, loving and enduring Navy wife in San Diego, California and Jacksonville Florida; an airline wife in Detroit, Michigan, Chicago, Illinois, and San Francisco, California, and finally in 1983 became a retiree’s wife in Grass Valley, California, the last 19 years residing in Kingman, Arizona.

In all these times Aldee was a super wife and mom to a most grateful and adoring husband and daughters. Praise be to the Lord.