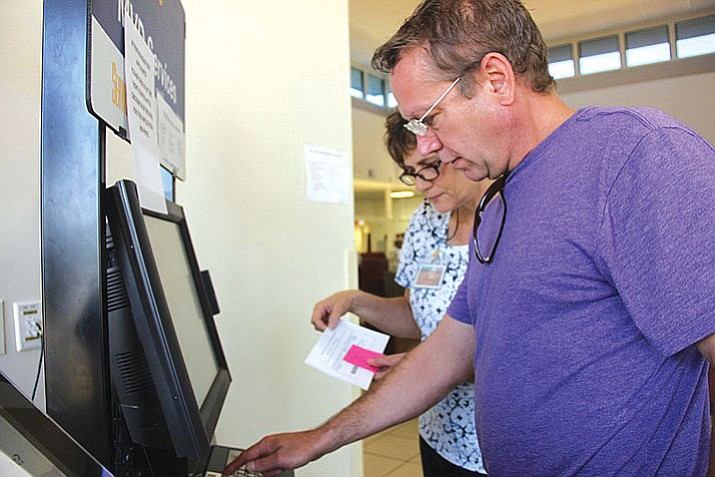 An Arizona Department of Transportation Motor Vehicle Division visitor in Prescott navigates the location’s service kiosk with the help of an MVD employee.

When he lived in Virginia six years ago, Todd Richardson would sometimes spend upward of six hours in the state’s department of motor vehicles.

In his most recent visit to the Arizona Department of Transportation Motor Vehicle Division (MVD) in Prescott, it took him more like six minutes to walk in the door and walk out with what he needed.

Part of this is because Prescott’s MVD location has relatively low traffic.

“I’ve never found the MVD here to be anything but quick and easy,” Richardson said. “But, of course, it’s a matter of perspective of where I came from.”

Another reason is the MVD has been striving to cut down on wait times statewide in the last couple of years.

“About 55 percent of everything you have to do can be done on a kiosk or on ServiceArizona.com,” said Douglas Nick, ADOT’s assistant communications director for Customer Outreach.

Then, at the directive of Gov. Doug Ducey, the MVD began implementing a series of lean management techniques – locally known as the Arizona Management System.

“It’s putting business practices into how government operates,” Nick said. “MVD was a great place to do that. This is a customer service oriented business.”

Employees are empowered through this system to make suggestions on how operations could be run more efficiently.

If a suggestion is implemented, it’s considered a completed kaizen, which simply means “change for better,” and the employee is rewarded with recognition as well as a cash prize between $5 and $100.

Rather than customers receiving ticket numbers and waiting for their numbers to be called over a public announcement (PA) system, they instead receive a line assignment, such as line A or line B.

Unless they specifically request to sit in one of the few available seats primarily reserved for those with appointments or who are handicapped, then the customers are directed to stand in their assigned lines.

This forces customers to know exactly when it is their turn to be serviced, instead of getting distracted or confused and missing their cue from the PA system.

“Up here, we had a lot of customers who would get distracted in a conversation, with their phone, with a book, knitting, whatever else, and they weren’t hearing when their numbers were called,” said Angel Blatzhiem, customer service manager for the MVD in Prescott.

Since Silent Call was implemented at the Prescott location on May 31, efficiency has noticeably increased.

For the three months before the switchover, the average door-to-door time (the time it took a customer to enter the Prescott MVD and leave with what they needed) was about 33 minutes.

For the three months after the switch, that time was just 24 minutes.

“It’s getting quicker; it’s getting better,” said David Frey, who had just left the MVD after a transaction.

Some, however, do not like that Silent Call requires them to stand.

A way for motor vehicle owners to not worry about standing in lines is by going to an MVD Authorized Third Party provider. These private businesses offer most of the same services as the MVD at a slightly higher price tag because they’re offering a convenience and wish to make a profit doing it.

Even though the MVD and third party providers consider their relationship more of a partnership than a competition, Ken Foote, owner of FooteWork Auto License and Title Service, said the MVD’s push for providing better customer service is encouragement for his business to exceed customer expectations as well.

“I think healthy competition makes both sides better, and so their change is a result of how effective the third party program is, and, of course, we always want to remain viable for our customers, so we’re always looking for ways to provide a better service ourselves,” Foote said.