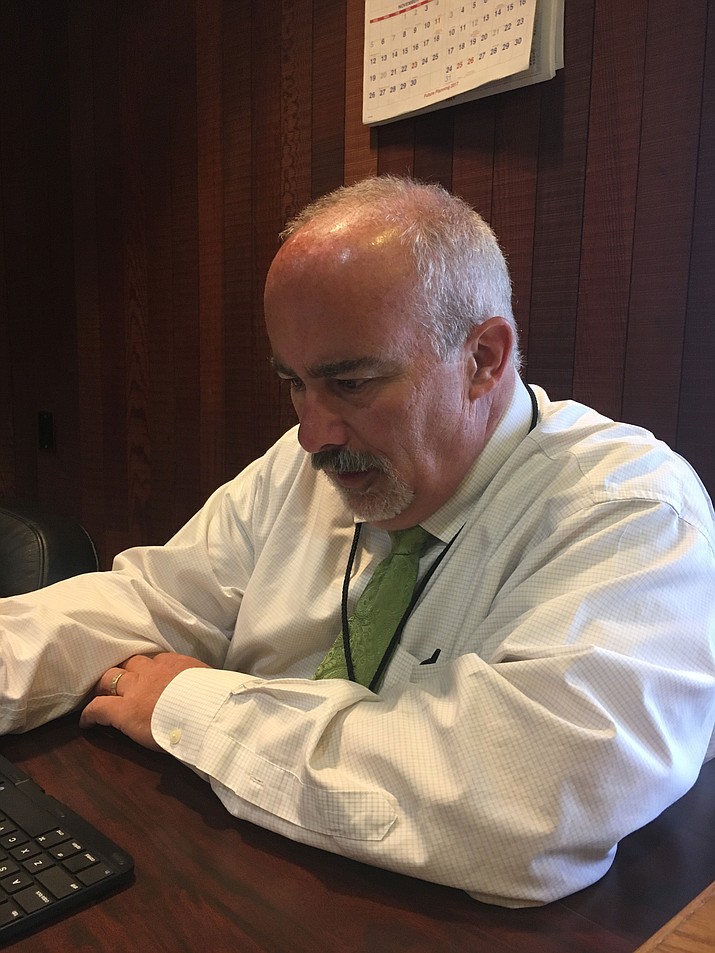 John Dougherty, Kingman City Manager, reviews documents during a City Council meeting. His contract, which expires at the end of November, was not renewed by Council at Tuesday’s meeting.

KINGMAN – It wasn’t easy finding a city manager with John Dougherty’s experience and qualifications, so it was a surprise to some that City Council voted against renewing his contract at Tuesday’s meeting.

Dougherty, 58, underwent a performance evaluation in early September and said he found the results “shocking,” so he wasn’t as surprised by Council’s decision. His contract expires at the end of November.

When he took the job as Kingman city manager in 2013, Dougherty said he looked forward to working with then-Mayor Janet Watson and the Council. He said his strong suit was finances.

“While there is a lot of work to do here in Kingman, I wouldn’t have it any other way,” he said. “I see a lot of potential that has yet to be realized here and I look forward to working with the community to achieve great things.”

City Council scheduled a special meeting at 8 a.m. today at Kingman Police Department to discuss the recruitment process for a new city manager. It generally takes at least four months to fill the position, and another month or two before the person starts the job.

Dougherty was an exceptional communicator, team player and city manager, former Mayor Richard Anderson said. He was an “exceptional” hire after two previous city managers who were good people, but without the scope of Dougherty’s expertise.

“A sad day for Kingman,” Anderson said in a message to the Daily Miner. “I hope the City Council wakes up and corrects this unbelievable decision.”

Lingenfelter made the motion against renewing Dougherty’s contract after Council met in closed session. Vice Mayor Jen Miles seconded the motion, and it passed 6-1 with Councilman Stuart Yocum opposed.

Neither Gates nor Dougherty responded to a request for comments from the Daily Miner about the performance evaluation or progress made during his time as city manager.

Dougherty was chosen for the job over Lingenfelter, a Kingman native with a rich family background, and Utah’s Konrad Hildebrandt. His starting salary was $115,000, and his contract was renewed for $127,000 in 2015.

Gregg Martin, president and chief executive officer of Kingman Area Chamber of Commerce, said he developed a good working relationship with Dougherty on projects such as economic and business development and decisions pertinent to the Chamber’s business members.

“He was always accessible, always listened and was always helpful,” Martin said Thursday. “The relationship I experienced with John has always been positive.”

The Chamber’s relationship with the city is obviously important, and Dougherty made himself available to hear the issues, Martin said.

“It’s always difficult when these things come up,” he said. “What I do hope is when there are significant changes – and this is certainly one of them – that there will be some big opportunities to come from it.”

Anderson said he’s seen growth in Kingman’s population and business base in the nine years he’s lived here, and he’s also seen a backlog of infrastructure and maintenance due to lack of resources.

“The City Council is responsible for guidance, providing resources and making decisions on items brought to it,” he said. “The Council is not charged with making day-to-day operational decisions. It is important that Council members meet with the city manager to discuss issues and provide input.”

Dougherty and his wife, Ruthanna, were active in the community, more so than previous city managers, Anderson said. He was a dedicated public servant who did the job he was hired to do with the resources provided.

“I am curious as to the performance metrics this Council has established and how these were considered in their decision,” Anderson said.

He wrote and administered grants, negotiated labor contracts and was a liaison on governmental committees.

Dougherty received a bachelor’s degree in business administration from Illinois Central College in Peoria, and a bachelor’s in political science from Eastern Illinois University in Charleston, Illinois.

He returned to Peoria and was hired in the county administrator’s office, working at various positions while he pursued his master’s degree in political science with a focus on public administration at Western Illinois University.

Just before coming to Kingman, he worked as an independent contractor for a municipal consulting firm.