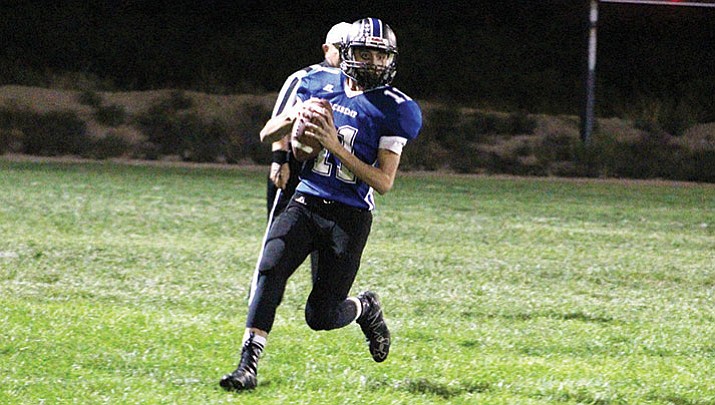 Tigers quarterback Kekoa Makaiwi-Stroup has racked up 938 yards and 11 touchdowns this season.

KINGMAN – The Kingman Academy football team continues region play tonight as it travels to Sedona Red Rock for a 7 p.m. contest. Tigers head coach Dan Stroup knows as the playoff quest continues, the team will keep the same focus no matter the opponent.

“There are probably several teams in our division that are better than us on paper,” he said. “They have better numbers, they have better players and they may have all that. But when we get in a ball game regardless if it’s the No. 1 team in the region or if it’s another level team from a different or higher division, we just try to have that relentless pursuit of the competitive edge. Whatever we can do well against them, we’re going to try to go out and do that.”

The Academy (2-2, 1-0 2A Central Region) looks to build on a successful region opener where it crushed Camp Verde 48-0 last Friday. The Scorpions (0-4, 0-1) are still in search of their first win this season, but Stroup isn’t overlooking the fact they have two capable quarterbacks.

“If (Francisco Javier Pacheco) is there, it makes it more difficult for our defense because he’s really nifty,” Stroup said. “He’s a good player for them. If he can’t go, they’re straight forward in what they do. The quarterback who is replacing him, (Carlos Palo-Landaverde) throws a pretty good deep ball, but he’s not as fast and mobile like the other kid.”

The Tigers’ focus on offense, meanwhile, will be on not turning the ball over after doing so four times last Friday.

“The biggest thing is consistency and that’s all we can do,” Stroup said. “We can do our drill work – try to strip our running backs, knock the ball out of the receivers’ hands, try to take the ball away from the quarterback and those type of things to make us work hard every day.”

The Academy has shown positive signs when it doesn’t turn it over. Tigers quarterback Kekoa Makaiwi-Stroup has racked up 938 yards and 11 touchdowns this season. Gabe Imus leads the team in receiving with 400 yards and six touchdowns, while Stevie Wusstig has rushed for 280 yards and one touchdown.

“We always start as gangbusters on offense – we’re really good on the first couple of series and move the ball,” Stroup said. “Then we kind of fall off a little bit for a couple of drives and then we catch our wind again. We just need to executing on all the drives and taking care of business.”

At the same time, the Academy wants to make sure not to focus too much on the opponent. Instead, Stroup wants the Tigers to worry about how they’re playing the game.

“A lot of people get caught up too much in ‘the opponent is the enemy,’” he said. “… It’s almost as if to play them, you have to hate them. I think that rarely helps you out. To me, that’s negative coaching. The only competition that matters in my mind takes place within ourselves. It’s not about the external factors.”