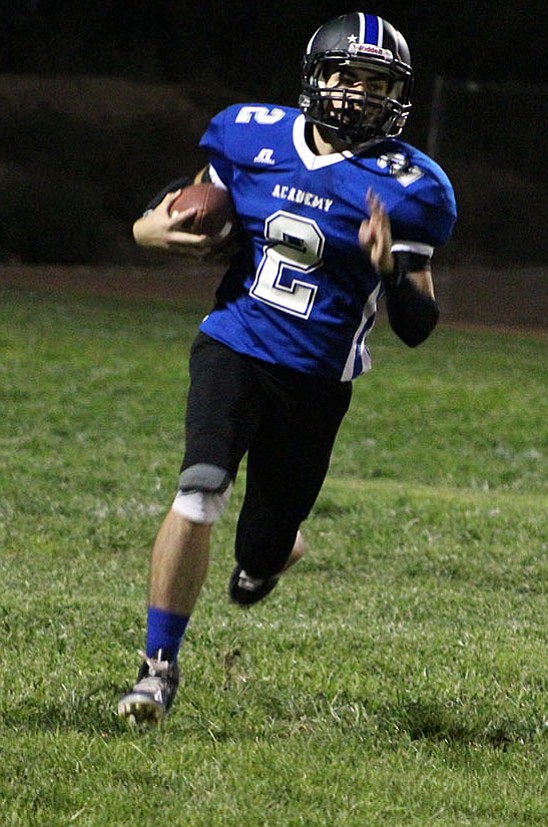 KINGMAN – The Kingman Academy football team is known for its passing game, but Sedona Red Rock showed early on it was determined to stop the Tigers’ air attack. That didn’t stop the Academy, as they rushed for 408 yards and six touchdowns in a 56-28 road win over the Scorpions.

“We can run the ball when we want to,” said Tigers head coach Dan Stroup. “We just went to town on them. The line blocked really well and the backs all ran crazy. The offense played pretty well.”

Stevie Wusstig led the Academy (3-2, 2-0 2A Central Region) with 13 carries for 183 yards and two touchdowns. Joey Martin added 132 yards and two scores and Tyler Wheeler ran for 59 yards and one touchdown.

Tigers quarterback Kekoa Makaiwi-Stroup went 9-for-17 for 162 yards with two touchdowns and one interception. He also rushed for 34 yards and a score. Nate Perea caught three passes for 58 yards and a touchdown, while Gabe Imus had three catches for 57 yards and a score.

“We were able to pick our spots and still get a few passing touchdowns – be more balanced,” coach Stroup said. “We had over 550 yards in total offense. That’s pretty good.”

Sedona (0-5, 0-2) only forced two Academy turnovers – one interception and a recovery on a bad snap. It was a vast improvement for the Academy after four turnovers against Camp Verde.

The Tigers return to Southside Park Friday for a 7 p.m. contest against Parker.