Local author publishes book she wrote as a teen 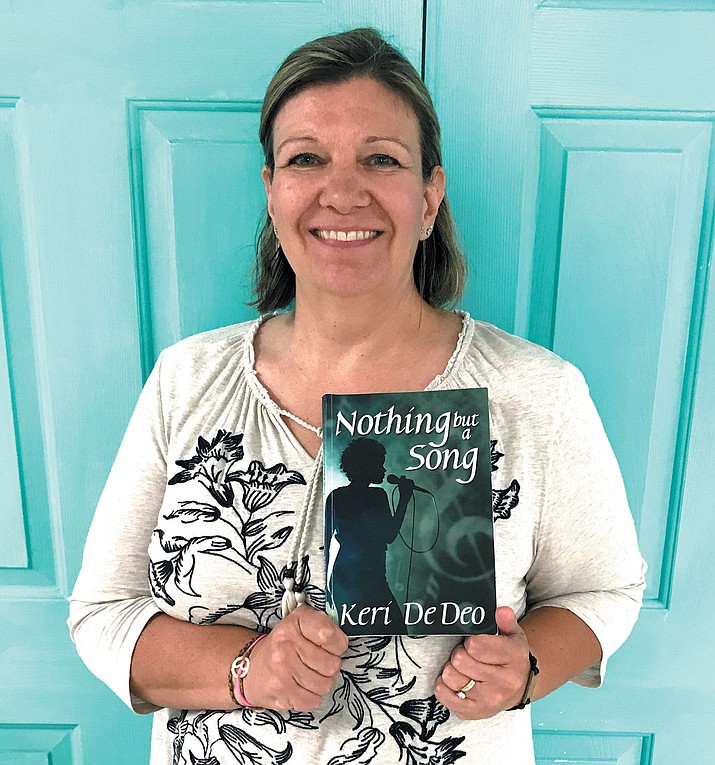 Keri De Deo with a still-being-edited copy of her novel ‘Nothing but a Song.’

KINGMAN – A local writer dug up some teenage scribblings and turned them into a book.

Keri De Deo, 48, is an accomplished musician on violin and viola and breast cancer survivor, but that’s not what her story is about. At age 14 she wrote a story in two spiral notebooks and tucked them in a box. A few years later she moved off to University of Arizona and ultimately University of Wyoming where she got her master’s degree in English composition and rhetoric.

She moved to Kingman in August and brought along a few 50-gallon storage tubs. While sifting through the tubs last year, she stumbled upon “Nothing but a Song,” the story of 19-year-old girl who aspires to be a music star, but goes deaf after a car accident.

“I had that story in the back of my head for years,” De Deo said. “I could never get it out.”

She got it out – onto print and starting in early October, on Amazon and Lulu.

De Deo has been writing since the age of 10 and playing music since she was four. She’s now a freelance writer and editor and teaches part-time at Mohave Community College. She was working for Crystal Publishing in Fort Collins, Colorado as an editor when her publisher said the company needed more book ideas to push. De Deo mentioned ‘Nothing but a Song’ and the publishing company bit.

Her story grew from the combination of her admiration of composer Ludwig van Beethoven, who was himself deaf, and modern technology.

“I was inspired by Beethoven and have always wondered what it was like to be deaf,” De Deo said.

The technology she speaks of are music and voice tuning smartphone apps such has gStrings and GuitarTuna. No such things were ever thought of existing when she started her music career, and the adults in her life scoffed when she mentioned the possibility of such technology.

The writer has since met one of her favorite authors, “Outlander” scribe Diana Gabaldon, and has words of advice for aspiring artists.

“To use an old cliche, ‘Where’s there’s a will, there’s a way,’” De Deo said. “Don’t be afraid to ask for help. My main character needs help – I don’t want to spoil anything but – she gets it.”

“Nothing but a Song” will run around 130 pages when all edits are complete. The two ruled spiral notebooks she used for “Nothing but a Song” were covered in handwriting from front to back covers. Those aren’t the only ones, but De Deo said she started using a computer eventually. When she’s not editing or teaching, she’s writing, which gives her brain the extra room for more ideas.

“There’s so much on my mind,” she said. “Jotting stuff down makes more room for me.”

“Keep everything you ever write, make time for writing, read a lot and keep submitting your work,” she said. “Hopefully someone, somewhere, will pick it up. Even if no one does, the love is in the storytelling.”