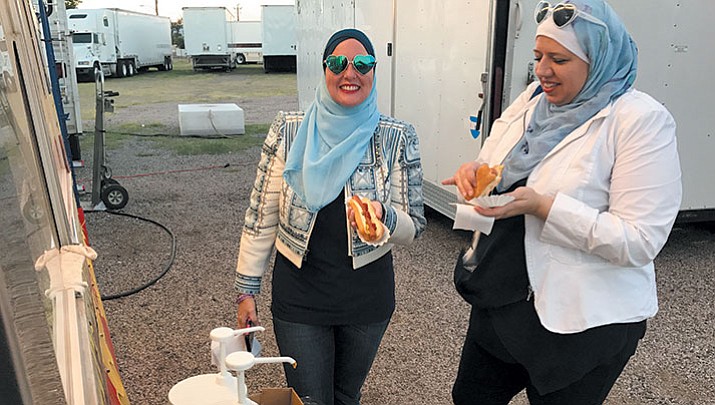 A controversial U.S. Senate candidate and her friend, both American-born women and later Muslim converts, paid a visit to the Mohave County Fair in September.

Deedra Abboud, 45, and potential 2018 opponent vying for Sen. Jeff Flake’s seat, is a Phoenix-based attorney and founder of the leadership consulting firm Global Institute of Solution Oriented Leadership. Her friend and “campaign cheerleader,” Tara Ijai, 44, runs her own business and movement, Love Glasses Revolution. They’ve known each other nearly 20 years.

“Team Deedra” was well aware of what they’re up against in a mostly conservative, Republican state, and even more in Mohave County, which had the highest percentage of Trump voters in Arizona for the 2016 General Election.

“I’ve been to Kingman many times over the years,” Abboud said. “They are just great people and any time you meet people as people, you can have a great time.”

Abboud’s visit was announced via social media Sept. 13 and fairgrounds staff had no knowledge of her stopover, but later learned that she’d be hanging out at the Mohave County Democrats booth inside the exhibit hall (kittycorner to the Mohave County Republicans). Her campaign staff was put in touch with fairgrounds security, which was wondering if they should bring on extra security.

“No extra security was needed,” said Ramona Auld, fairgrounds security manager. “To be honest, no one paid any attention to the fact that she was at the fairgrounds.”

Which was about right. Abboud and Ijai showed up with three campaign assistants, got set up with T-shirts, stickers and petitions to get Abboud on the 2018 ballot. Rather than just sit in a booth, the women, took a walk through the carnival, enjoyed some greasy fair food and talked about themselves as Muslims and Americans.

Like anyone who finds religion, the women had their reasons for converting to Islam.

Abboud grew up as a white American born in the south and the only discrimination she ever experienced was being poor and female. She wanted to convert Muslims to Christianity and started studying Islam so she would be better at convincing them it was wrong.

“After several years of study, I decided Islam spoke to me,” she said.

Ijai said everyone has their own journey.

“I felt like it spoke to me when I was seeking spiritual direction,” she said. “I feel it’s made a difference.”

The women wear the traditional hijab along with conservative, long-sleeved coats knowing they’ll attract the occasional stare. After 9/11, Abboud became more aware of people’s fear and, as a civil rights advocate, became Arizona’s point of contact for those who’ve experienced discrimination.

“I do not have the expectation that people will treat me differently,” she said. “I don’t assume when people react to me negatively that it has anything to do with me or the way I am dressed.”

Abboud’s and Ijai’s reasons for jumping into politics can be traced to the heated rhetoric of the 2016 presidential election. They watched many ethnic and economic communities being thrown under the bus for political gain.

“I decided I need to do something extraordinary to help change the conversation to something more unifying and focusing on accountability of our elected leaders,” Abboud said.

Ijai wasn’t exactly interested in politics, but found her way into it by circumstance.

“Deedra told me, in her southern accent, ‘Honey, if you’re going to wear that scarf on your head, then you woke up political,’” Ijai said.

Abboud has been a civil rights and social justice advocate in Arizona for nearly 20 years and wants to hold our institutions and elected leaders accountable.

“I decided to close my law firm and run for U.S. Senate so that I could have these conversations about inclusivity and accountability from the inside,” she said.

The negative experiences have been few.

“In 20 years of traveling all over Arizona and the U.S., speaking to diverse communities, including Republicans, I can count the negative reactions to me as a Muslim on one hand,” Abboud said.

She’s had only two “negative” real-life experiences since announcing her campaign in April. In May, white supremacists decided to protest a meet-and-greet at a vegan restaurant in Ahwatukee with their white power flags and anti-Muslim signs.

“We asked the local police to allow them to protest in front of the restaurant (on private property) for one hour, and then tell them they needed to move to the public space by the road,” Abboud said. “We wanted to allow their free speech so that others could know this mentality exists in the local community and show the white supremacists we will not fear them.

“One of the same white supremacists from the restaurant protest showed up at an LGBTQ church panel I was on in Phoenix. He accused me of terrorist ties. I listened and responded to his false accusations and conspiracies for about 10 minutes and then returned to the panel issues.”

The women’s attitudes are positive even in the face of hostility from the conservative demographic.

“The white, Christian majority is not hostile,” Abboud said. “It sounds like a large group because (extremists) are loud and proud, but they are a small number. The majority are loving but quiet, which creates a vacuum and the illusion of a growing majority.”

Her campaign is creating a space and opportunity for people to speak out to those few loud and proud, even if it’s just to tell them they don’t agree.

“That’s a beautiful start to how we will get back to being a community again,” Abboud said.

The women aren’t so much about trying to convince the “other side” to adopt their views, but more of realizing who the voters are, what they want and getting them to the polls.

“We are focusing on the people, all the people, affected by elected leaders making promises and not keeping them, talking about issues one way but voting the opposite, only meeting voters if they’re donors and simply ignoring areas outside the larger cities,” Abboud said.

In almost 20 years of traveling around Arizona, and since announcing her campaign in April, Abboud is convinced most conservatives and liberals are not 100 percent aligned with their respective philosophies.

“There is a lot of cross over on issues,” she said. “For example, a lot of conservatives are advocates of civil rights for their minority neighbors and a lot of liberals are concerned about the economy and budget. We all want to get to the same place (safe communities with opportunities for ourselves and our children), we just have different ideas about how to get there. If we can agree on the destination, we can figure out the highway.”

Abboud knows that many voters, regardless of political leanings, agree that political leaders are being heavily influenced by corporate and special interest money in politics. She’s signed a contract (Candidates with a Contract) stating she will not take corporate money, ever, and encouraging voters to hold candidates accountable to that ideal.

“If they claim the corporate money is a negative influence, why aren’t they rejecting it?” she asked. “Why aren’t they willing to sign a contract stating they won’t take that money? If we pressure them and demand they don’t take the money, we can get the money out of politics. That’s on us. We need more than words and false promises. We need more accountability.”

Abboud has described Arizona’s political landscape as about one-third Republican, one-third Democrat and one-third other (Independent, Libertarian and Green party). She said it’s the voter turnout – or lack thereof – that often leads to Republican victories.

“We don’t have to convince all the conservatives, we have to excite as many people as possible,” she said. “That’s the only way they will turn out on election.”

Abboud and Ijai’s reception in Kingman was pleasant. They expected a great time and that’s what they got. They took selfies with supporters, walked around and chatted with fairgoers. Abboud’s southern drawl caught the curious ear of a few passersby. She almost got on the mechanical bull, but changed her mind when the line got too long.

“We had a wonderful time and that’s exactly what we expected,” Abboud said. “Everyone was so friendly and full of joy, or maybe we brought out their joy.”

Ijai had one questionable look but chose to interpret it as curious and confused.

“We can work with curious and confused,” Abboud said.

Abboud and Ijai will be back at 6:30 p.m. Oct. 4 for the Democratic Women’s Club of Kingman meeting at Calico’s.

For more information on Abboud and Team Deedra, visit www.deedra2108.com.

“I’ve been to Kingman many times over the years. They are just great people and any time you meet people as people, you can have a great time.”