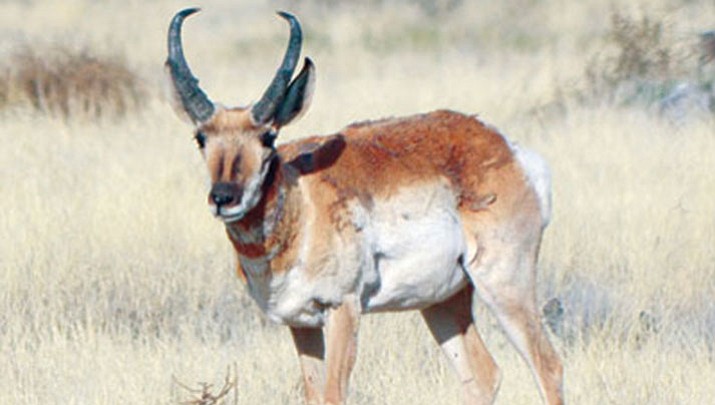 The antelope was captured in the wild by a camera.

Every year I hear stories about the success – and failures – of hunters who are in the field in pursuit of animals they have drawn tags for.

Some of them are very special, as is the case with Kingman resident Jake Moore.

This 16-year-old beat some tremendous odds this year when he drew one of the most sought after antelope tags in Arizona. Moore, who had never applied for antelope before, drew one of the 100 tags in Game Management Unit 10. Each year, over 8,000 sportsmen from all over America apply for those coveted tags.

Moore had taken and passed a hunter education class a few years ago and had been chosen to participate in a special youth-only pheasant hunt.

But he had been unsuccessful in his application for deer and elk tags.

But now with a coveted tag in hand, the process started to get him prepared for this maybe once-in-a-lifetime hunting opportunity.

Ron Moore is Jake’s father, and he enlisted the assistance of Kingman resident Brandon Lawrence to put together a rifle that would be both accurate and deadly out to 500 yards.

Antelope have the eyesight that is equivalent to that of 10 power binoculars and old bucks are hard to get within range. A long-range accurate rifle can be a huge help on these hunts.

It was decided that Brandon would put together a rifle in 7mm Magnum caliber, topped with a 4x16 Vortex scope. Lawrence also worked up custom ammunition that featured Berger 168 grain VLD bullets. The load was both accurate and carried a lot of knockdown power out to 500 yards.

With the new rifle dialed in, the hunters started to make scouting trips to the unit. They found plenty of antelope and lots of quality bucks. That is what this unit is known for. Assisting on the hunt would be friends Tim DeVault and Thom Howell.

On opening day Howell located a big buck that all agreed was a true trophy, but he was a long ways off. Ron and Jake set out on a stalk while Howell and DeVault watched from a distance.

It was a long stalk, and finally Jake and his dad closed the distance to 416 yards.

While Jake set up to shoot, his dad made a necessary scope adjustment that would allow for an accurate shot at that range.

Jake was understandably excited, and so was his father as Jake prepared to take the shot.

When it came time to fire, the rifle recoiled and much to the dismay of everyone, the shot hit way low.

The big buck didn’t stick around and was soon way out of range.

Dejected, the hunter and his helpers couldn’t figure out what had happened.

That was until they went over the sequence of the stalk and shot, and Ron determined what had happened.

When Ron had dialed the scope in for the range of the buck, he had actually put in the wrong adjustment.

That meant there was no chance for a hit.

And so the hunt continued.

The next morning Jake spotted another large mature buck that was in the same general area as the first had been. This one had six does with him.

Jake, Ron and Thom made a long drive of about 4 miles around the broad open valley to get into a better position for a stalk, but they would still have a long ways to go.

The weather wasn’t good with intermittent rain showers as the trio made a several-mile hike to try and close the distance on this buck.

They got to within 430 yards, and once again the young hunter got set up and was ready to take the shot.

This time Ron got the correct elevation dialed in on the scope and when Jake squeezed off the round, the buck hit the ground.

There had been “redemption” for Ron and Jake.

There was some discussion if this buck was the same one as Jake had shot at on opening day.

Ron was sure this one was a different buck.

“The first one was a little bigger,” he said.

The buck Jake had taken was tall with good mass. Though it hasn’t been officially scored yet, it is no doubt a trophy for the young hunter.

The buck was taken to Amber Kirby at Down and Mount Taxidermy, and she will do the taxidermy work on the trophy.

Lady Luck had smiled on Jake in drawing the tag, and then with the help of some friends and family, he took a mature buck on his first big game hunt.