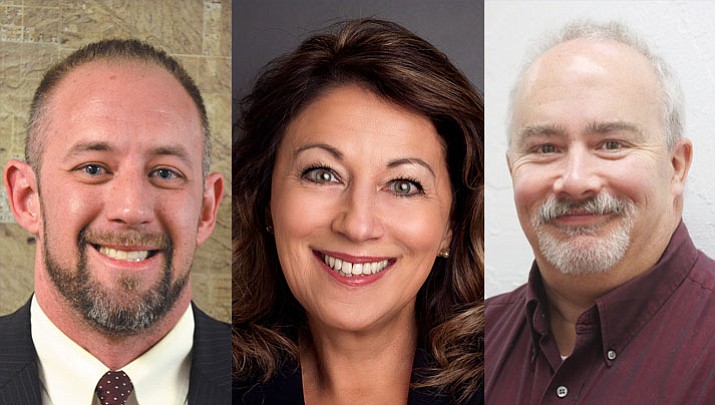 KINGMAN – The decision to not renew City Manager John Dougherty’s contract was based on his self-evaluation, an aggregate council evaluation and an “inability to adequately achieve the performance measures and expectations set forth by the Council,” Mayor Monica Gates wrote in an email to the Daily Miner.

The City Council, Gates continued, by virtue of the non-renewal of the contract, has determined that a change in leadership will better enable the Council to focus on creating policy in the best interest of the City.

Vice Mayor Jen Miles said the decision to not renew Dougherty’s contract was not an easy one.

“However, I believe the Council acted on the belief that substantive Council-led policies and directions must be advanced more successfully,” Miles said. “This will require positive leadership, initiative and ability to align stakeholders and staff to support our opportunities for growth and development.”

Councilman Travis Lingenfelter, in a Facebook post Sunday, had a specific laundry list of reasons he voted not to renew City Manager John Dougherty’s contract. Issues ranged from the airport and industrial park to quality of life improvements, all of which Dougherty has responded to.

“Plain and simple I got caught in the crossfire of this Council and its various factions,” Dougherty said. “Council decides what the priorities are, not the City Manager or City Staff. We always give recommendations but they are not always followed or listened to.”

A past city administrator in Wisconsin, Dougherty said this year has been the most stressful of his career.

“I could see no matter what I did, some group on this Council was not happy about it. I asked around a lot of city managers about what I can do when caught in a crossfire, and nobody had a recommendation,” he said.

“I have continually encouraged dialogue, but council sets policy, and this council’s policy direction has been quite different from the past,” Dougherty wrote in an email to the Daily Miner.

At council’s direction, Dougherty said there was a consultant hired to create formal written set of policies and procedures for cash handling in the finance department, in response to the $1.1 million embezzlement case, and have yet to get anything useful back, which the Council was notified of Saturday morning.

Dougherty said if Lingenfelter had attended budget hearings, he would know what has been proposed in regards to increasing revenue streams, and said revenue increases were proposed and are coming forth in October.

He continued to say Lingenfelter has no substance in the claim that there has been no recommendations put forward by Dougherty regarding roadway improvements.

“I put forth a proposal for street improvements based on the amount of money available,” Dougherty said. “Council was told if they pass the TPT (transaction privilege tax) for street maintenance then we will do X number of streets for each 0.25 percent increase.”

In response to Lingenfelter’s critique of Dougherty failing to put forth professional recommendations regarding the establishment of an economic development strategic plan, with measurable goals and performance metrics, Dougherty said he couldn’t create a plan until he hired an economic director.

This process was years in the making, after a previous council had eliminated funding for the economic development director. Those duties, Dougherty said, fell to the director of developmental services until his retirement in 2016. Dougherty then, despite council members objecting, reorganized the department.

As to Lingenfelter saying improvements to quality of life in Kingman, including night lighting in parks for youth sports leagues and other park issues like gopher holes, maintenance of turf, and repair at playgrounds has remained at the status quo, Dougherty said this would have been answered by inquiring about the budget or attending budget hearings. Every year the top priority has been public safety.

“This was not a difficult decision for the Council, unbeknownst to me, it has been brewing for a while,” Dougherty said. “Now, what you don’t yet know is that not one of these subjects above was ever brought up during my evaluation. Curious? I think not, this is a member of the Council now trying to justify what they have done to me and this City that I love.”

Dougherty said he asked to have the minutes from the Sept. 19 closed session released to the public.

“Since it could potentially prove damaging to the Council members themselves, I doubt they are going to want it released,” he said.