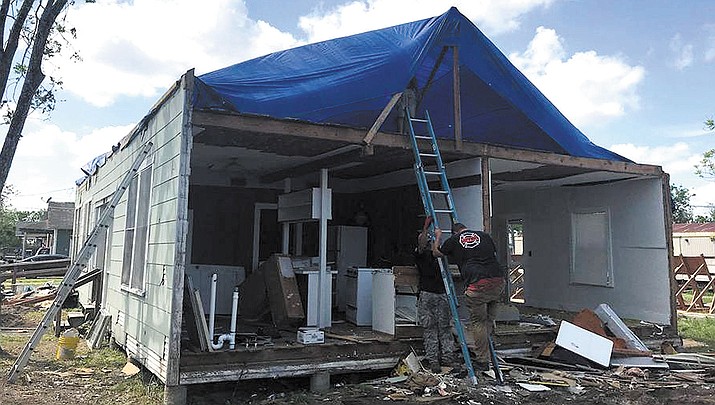 One of the many homes damaged by Hurricane Harvey. Charles Black and other volunteers have helped clean and rebuild the town of Woodsboro, Texas.

Black arrived in Woodsboro, Texas, about 40 miles north of Corpus Christi, Sept. 7 and immediately teamed up with rescue operations supported by Grunt Style, a U.S. veteran-run clothing company. His counterpart, Brian Kelly, arrived a few days later and is still on ground at the Woodsboro Family Center, which has been a hub of community activity before, during and after the storm. The center was damaged, but has since been repaired at the request of Woodsboro Mayor Kay Roach.

“It was important to her for the center to be rebuilt,” Black said. “Kay was only in office for three months when the storm hit. She’s got quite a challenge ahead.”

Black described the family center as a “Goodwill and food bank combined.” Volunteers have been passing out food, diapers, hygiene items, clothes and cleaning supplies to about 30 to 50 people a day. It didn’t take long for people to abuse the system.

One woman was chased off after trying to get diapers, but told conflicting stories of the baby’s age and admitted to being from San Antonio, which was nowhere nearly as damaged as the Houston area.

“All they got was rain,” Black said.

But the good outweighed the bad.

“The community has been unbelievable,” Black said of the heart and hospitality of Woodsboro residents. “We had one couple who lost their home volunteer at the center. Even though they lost everything, they still wanted to help others.”

Black and Kelly are both U.S. Army vets, Black an infantryman and Kelly a motor transport operator. They roughed it in the true style of a soldier. Black slept in his Ford F-150 for the most of the stay and Kelly in a tent. They did catch a break when a local Samaritan let the men sleep in his house while out of town. The rest of the volunteers slept on cots in the community center, and Grunt Style has covered the costs of food.

When Black arrived, electricity and running water were out, but were restored by the time he left. There are still homes to be fixed and piles of debris to be cleared, and Black will be leaving again Friday to continue the work. He’ll be taking his 14-year-old son, Ethan Cortez, along while the teen is on fall break from Kingman Middle School.

“When I got back, I told him, ‘Guess what you’re doing for the break?’” Black asked the boy. “He was excited. He’s looking forward to it.”

Black wants to work with Dillon Transportation, the Kingman Airport-based business, which also assisted with hurricane relief, to possibly come up with a trailer capable of handling future volunteer efforts. Right now, deliveries for hurricane victims have slowed down and the rebuilding phase has begun.

Black is funding the trips out of his own pocket and plans to continue aid efforts, possibly even for Puerto Rico after Hurricane Maria leveled much of the U.S. commonwealth. Monetary donations to support this mission can be sent to Veterans at Sea, P.O. Box 3572, Kingman, AZ 86402.