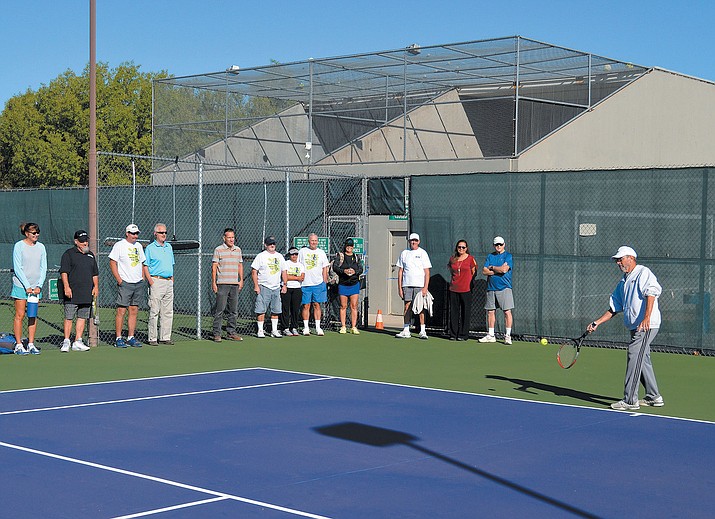 KINGMAN – A joint effort between the Kingman Tennis Club and the City of Kingman Parks and Recreation Department has granted tennis players a new surface to play on.

KTC kicked in $10,000 and the city $11,600 to resurface and repaint the tennis courts at Centennial Park. KTC President Brooke Fix, Parks Director Mike Meersman and other KTC members and city employees officially re-opened the courts Wednesday morning during a ribbon cutting ceremony.

“I can’t be everywhere to see everything that’s wrong with the parks every day,” Meersman said as he thanked KTC for pointing out much needed repairs at the courts. “It’s nice to see the community work together.”

The courts are open year round and, between the tennis club and high school tennis teams, get plenty of traffic. KTC helps the city with court upkeep including installing new nets and cleaning the courts once a month.

KTC meets three times a week; Monday and Wednesday at 5 p.m. and Saturday at 8 a.m. Any one is welcome to join the club for an annual fee of $15. They can also show up for walk-in tennis and play for a non-member fee of $3 (members pay $2). All you have to do is bring tennis shoes and a racquet.

“There’s so many sunny days to play,” Fix said.