Libraries are being used for more than just checking out books 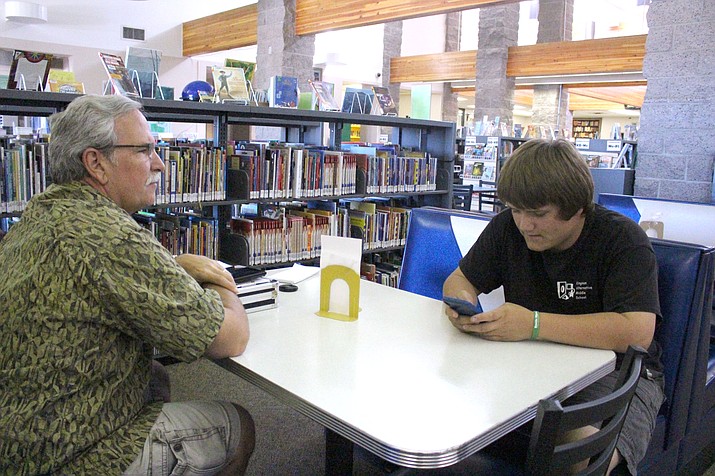 Noah Esquibel checks his phone at the Kingman library during a visit with MIKID respite provider John Christner. They use the library for social purposes and its WiFi access.

On any given day, you’re likely to see more people using computers at the Kingman library than checking out hardcover, printed books to take home and read.

That’s what John Christner does, though he visits the library about once a week as respite provider for MIKID, a family support organization with an office in Kingman.

“I don’t know how many people use hard copies,” Christner said at the library on a weekday afternoon. “People obviously still use the library. A lot of people come and use the internet and computers. I bring the kids in and we play card games and things.”

As the world becomes increasingly reliant on digital content available online at the touch of a screen, what’s going to become of these brick-and-mortar repositories for printed material?

About a dozen people spoke in support of libraries at a supervisors’ meeting in August, and the board voted to revisit the item, which will be Monday’s meeting.

Libraries are no longer just about books. The Kingman library has computer stations for children, teens and adults, as well as a separate computer lab where Briana Patton was doing her homework in pursuit of an online nursing degree at Grand Canyon University.

“It’s pretty important,” she said of the library’s purpose today. “I wouldn’t be able to do my homework. I do have a computer at home, but it’s less of a distraction here and I don’t have a printer.”

Hard-copy books are easier to use for research, Patton said, but most of the articles and books she needs for school can be found online.

“I still think there needs to be a computer lab. Maybe someday all books will be in the computer,” she said.

Along with books, libraries provide computers for public use, WiFi, downloadable content, instructions on using the internet, databases, devices and diverse programs for all ages.

“There is no doubt that technology has had a lasting impact on libraries,” Pennell said. “But as reliance on technology for everyday life functions continues to grow, our libraries continue to be a technology safety net for a large percentage of our population.”

She said digital content is certainly changing the way libraries do business. However, while the number of downloads is increasing, physical materials comprised 97 percent of Mohave County Library circulation checkouts, and digital downloads were 7 percent.

“Literacy has always been a focus for libraries and even more so now,” the library director said. “With a growing emphasis nationwide on ensuring that children acquire basic literacy skills before entering first grade, we have put added emphasis on early childhood learning programs that target young children and their parents.”

“Children develop much of their capacity for learning very early,” Pennell said. “Those who are able to begin developing language and literacy skills at birth will enter school ready to learn and be better positioned for success later in life.”

Supervisor Jean Bishop said libraries are changing and taking on more of a role as a community center in rural areas.

“I don’t know if that’s bad or good, but we have Dolan Springs and Meadview that are quite a distance from each other. I would not support closing them down,” she said.

The Kingman library sponsors programs such as the popular summer wildlife series presented by Arizona Game and Fish, which sometimes draws up to 50 people.

Many branches are bolstering their attendance numbers with outreach and education efforts such as children’s reading hours and job search assistance.

Pew Research Center did a 2016 library use study that showed an increase in the number of people visiting libraries for educational purposes.

Twenty-seven percent of library users said they attended classes, programs or lectures at their local library, up 10 percentage points from 2015. Of particular note, millennials – arguably the first generation to grow up online – use public libraries than older adults. More than half (53 percent) of Pew Research respondents age 18-35 visited a public library or bookmobile in the previous year, compared with 45 percent for Generation X and 43 percent for baby boomers.

The breadth of events hosted by a library depends on the physical space within each building, which is why a major part of this change comes in the form of reconfigured spaces. Library systems have been improving their physical structures to accommodate shifts in usage.

The end goal, according to the D.C. library system, is to position the library as an engine for social improvement as opposed to simply being a place to pick up or drop off a book.

“I don’t know how it’s going to be 100 years from now,” Christner said. “I’m sure they’ll still have books, but I don’t know how many hard copies we’ll have. With technology, so many things have changed.”

Even as new digital technologies continue to emerge, modern libraries will always remain home to large holdings of printed material. Many collections have already expanded to include e-reader visions of popular titles, music and video on a variety of media.

But the latest design improvements to libraries make them not only enjoyable venues for reading, but also welcoming places to build community.

–StatePoint Media contributed to this article.