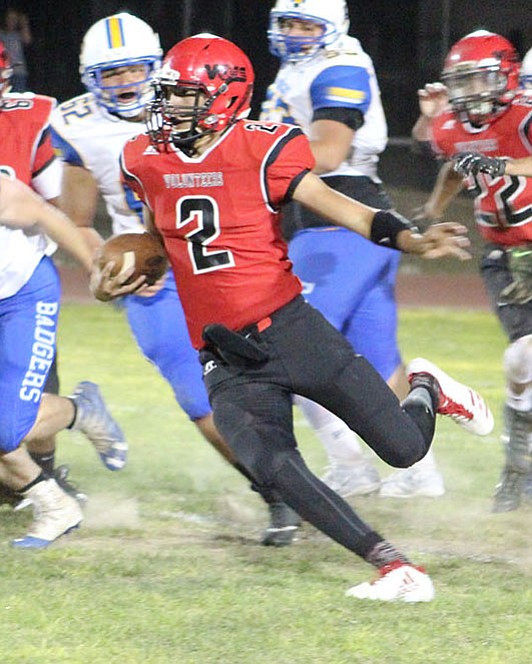 Lee Williams quarterback AJ Herrera has racked up five touchdowns this season, highlighted by four through the air.

KINGMAN – As the Lee Williams High School football team searches for its first win in the 4A Grand Canyon Region, it would be easy for the Volunteers to look at today’s 7 p.m. contest at Coconino as a good opportunity to accomplish that goal. However, Lee Williams head coach Clint Sasse knows that last year’s win against the Panthers doesn’t translate to this season.

“I never really put any thoughts to what we did last year,” Sasse said. “We like to stay in the present and focus on this season. We are a different team than last year. They are definitely improved – we have to play hard to win.”

The No. 21-ranked Vols (3-2, 0-2) will have to do it without Sasse on the sideline after he was ejected from last week’s loss to Prescott.

“It’s not something that I ever thought I would have to go through and it has been in the back of my head all week,” Sasse said. “But I have to hold myself to the standards that we hold our players to and control what I can control and that is giving our players everything I can in practice to prepare them for this week. Thankfully, I have a very good staff who will get it done.”

No. 28-ranked Coconino (1-4, 0-1) is also searching for its first region win after dropping a 21-0 loss to Mohave two weeks ago. However, Sasse knows the Panthers are a lot better than their record indicates.

“They are an athletic team who has a lot of big play potential,” he said. “Offensively, they try to take advantage of space, and defensively they are sound.”

In order to come out victorious tonight, Sasse knows the Vols will need to play to their potential.

“It all comes down to everybody doing their job every play, and we will do just fine,” he said.