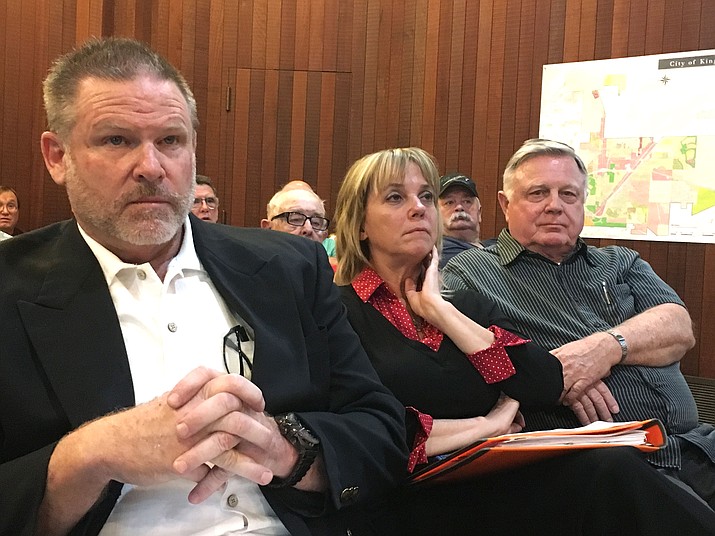 KINGMAN – City Council learned insider details about deteriorating conditions and poor management at Kingman Airport during a workshop Tuesday with representatives of the Airport Users Association, backed by about 50 supporters in the audience.

The meeting started with City Attorney Carl Cooper going over a list of legal firms he contacted about reviewing the city’s contractual agreement with Kingman Airport Association, and ended with a report card from the users association that gave the airport a “D” grade for maintenance and failing grade for promotion of aviation and business.

Financial and legal categories received a question mark because of what the users see as a lack of transparency in recordkeeping and reporting.

Cooper recommended Daryl Williams of the Phoenix law firm Baird Williams and Greer for an initial consultation on Oct. 3 prior to the City Council meeting. Council members will then meet in closed session and may come back to vote on his hiring.

Cooper said the attorney has an extensive background in aviation law, including a case with Yuma County’s airport that went to the Supreme Court. He’s visited Kingman Airport and has spoken with the Airport Users Association informally, and he has a forensic accountant that can be brought on board for research, Cooper noted.

Councilman David Wayt said he also made phone calls to law firms, and agreed with Cooper’s recommendation. Williams “stuck out more than the others,” and was willing to “jump right in” and review the airport contract before being hired, Wayt said.

Dave French, who will be retiring as executive director of Kingman Airport Authority at the end of December, said he wants Council to be comfortable and fully informed about the airport’s books.

They’re kept by Hinton Burdick PLLC, which also audits the City of Kingman, and formerly by Clifton Larson Allen.

“We are actually proud of the integrity of our books,” French said in an email to Council.

Council members are welcome to meet with auditors when they’re here, express their concerns and get expert answers, French said.

“It likely would be much more informative and practical than hiring a third accounting firm to look at the same books,” he said.

Jill Gernetzke, owner of M-14P aircraft engines, opened a PowerPoint presentation with a slide show of modern, updated airport facilities in Mesa, Lake Havasu City and St. George, Utah, then compared those to Kingman with its rotted wood, weeds growing through the taxiways and tarmac, torn chair cushions and an overall dirty, neglected appearance of airport buildings.

“Kingman Airport, a diamond in the rough, and nothing changes if nothing changes,” she said. “Are you willing to accept the status quo, or tell people we need and deserve something better?”

She said Kingman Airport was one of three campaign platforms that Mayor Monica Gates and Councilmembers Travis Lingenfelter, Jamie Scott-Stehly and Wayt championed for election in November.

She noted that the fourth workshop was canceled by KAA’s attorney because people were simply using it for a venting session.

“If KAA was doing its job, there would be no or very little criticism and we wouldn’t be here today,” Gernetzke said. “This is not about personalities, it’s about mismanagement. We know what Kingman Airport could and should be.”

Councilman Stuart Yocum said he was ashamed to see pictures of the airport. “It’s an embarrassment,” he said.

Carl Hays, who was sued by KAA in 2007 for declaratory relief, wanted to know where the $24 million from airport land sales and $14 million in annual revenue is going. It’s supposed to be used for capital improvements and airport operations, but he doesn’t see any of that.

FAA grant assurances require that the airport must have a pavement maintenance plan. “They don’t have one,” Hays said.

He went into detail about the agreement that transferred Kingman Airport from the U.S. government to Mohave County for $1 in 1949, which then turned it over to the city.

The land must be used as an airport and maintained in “good and serviceable condition,” the agreement said. There’s a “recapture” provision that gives the government use of the airport at no charge, such as the U.S. Navy training that takes place there.

There are also government restrictions on land sales, and it can’t be sold without government permission.

Paul Gaines told the Daily Miner in 2016 that he would never have relocated his aircraft fabrication business to Kingman from Atlanta eight years ago had he known how difficult it was going to be dealing with airport management.

Lingenfelter asked him if it was his desire to see the city take over the airport agreement and change management.

“Short answer, yes,” Gaines said. “What you’ve seen and heard here tonight is but a few of the problems pilots and airport users experience every day. It’s simply not the way to manage our most valuable asset.”

Gaines said there are people with aviation experience who could sit on an airport advisory board that “actually has teeth.”

“This is our life. This is not a personal thing,” he said. “I have allegiance with nobody out here. I have an allegiance to aviation. People think I want the (executive director) job out there. I don’t. I want to do my job.”