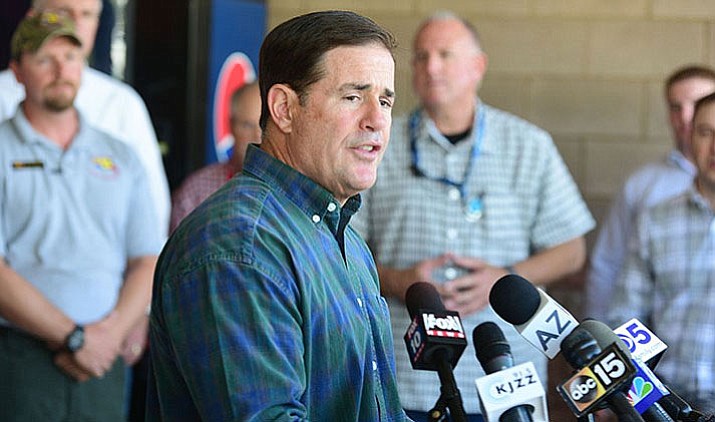 Gov. Doug Ducey has rejected the demands from Arizona teachers for a 20 percent pay increase, which would cost about $680 million. (File Photo)

PHOENIX – Gov. Doug Ducey said Thursday that teachers aren’t going to get the 20 percent pay hike they are demanding – not now and not in the foreseeable future.

And he intends to continue propose further cuts in state taxes even as teachers say without substantially more money they may have no choice but to strike.

Speaking to reporters a day after a rally brought more than 2,000 teachers and supporters to the Capitol, the governor rejected the demand they laid out. Ducey said he’s doing the best he can.

“We’re definitely trending in the right direction,’’ he said. “I’ve got a sense of urgency on this.’’ Ducey said that the state has increased funding for salaries by about 9 percent since he took office in 2015.

But less than half of that is for actual raises, with the balance being for the additional teachers that had to be hired because of student growth.

Ducey’s claims about the new money in K-12 education also include funds that came from voter approval in 2016 of Proposition 123.

That, however, was not really new dollars but instead funds to reimburse schools for what they did not get in prior years when lawmakers ignored a voter mandate to adjust state aid to schools annually to account for inflation. And most of those dollars actually came from a trust account that already belonged to schools in the first place.

What that leaves is the 1 percent increase that lawmakers gave teachers for the current school year – more than the 0.4 percent that Ducey had actually sought – and the governor’s promise of an additional 1 percent hike for the coming school year.

And what it also does is leave Arizona teacher pay close to the bottom of the barrel nationally.

Ducey disputed figures from the Morrison Institute that put salaries for elementary school teachers dead last when considering the cost of living, with high school teachers at No. 49. Instead, he says Arizona is just 43rd in the nation.

But the governor is not backing away from his pledge not only to never increase taxes but also in refusing to reverse any of the hundreds of millions of dollars in corporate tax cuts that have kicked in since he took office. Each $100 million that was lost would translate to a 3 percent pay hike for teachers.

Perhaps more galling to teachers is Ducey’s insistence that lawmakers approve yet another tax cut this year, albeit a much smaller one that eventually would reduce state revenues by another $15 million a year.

Ducey said he does not see tax cuts as antithetical to higher teacher pay. He said the state’s economy has grown since he took office, adding 160,000 new jobs.

Per-student state aid is up 5 percent in the same period. But it still remains more than 4 percent below where it was a decade ago.

“He’s going to continue to ignore and neglect us,’’ he said. And Karvelis isn’t buying Ducey’s argument that the state can improve its economy by continuing to shave off sources of revenue.

“Every single one of those tax cuts has come with the promise it’s going to inject capital and dollars into our economy,’’ he said.

Nor does he believe that 20 percent is unrealistic, pointing out it would not even bring the average salary for Arizona teachers up to the national median.

“It’s ridiculous he won’t even consider it,’’ Karvelis said.

Part of what is working against the teachers is the sheer size of their ask.

A 20 percent pay hike has a price tag approaching $680 million, which would require more than a 10 percent increase in the approximately $5.4 billion in state dollars now going into public schools.

Republican legislative leaders have said that while they think teachers deserve more, they just don’t have that kind of cash – and will not have since, like Ducey, they’re unwilling to consider tax hikes or reversing some of those corporate tax cuts.

But Karvelis said he believes many elements of the business community would support a tax hike if they could be guaranteed it would increase teacher pay.

That’s likely true. In fact there is a coalition of current and former business officials who have said the current 0.6-cent sales tax for education – the one lawmakers just extended until 2041 – should be raised a full penny. That would raise more than $1 billion a year, far more than enough to get teacher pay here up to the national median.

Karvelis conceded such a move would likely require gathering the signatures to put the issue to the ballot. And he said that remains an option, even for this year, though it would require supporters to gather more than 150,000 signatures on petitions by July 5.

And he said that, for Ducey, going that route would be worse for him than if teachers went on strike.

“We’re going to get a ton of teachers out to vote on that,’’ Karvelis said. “A lot of those teachers ... are going to be checking ‘yes’ to that ballot initiative and then they’ll be checking ‘no’ for him.’’

Ducey, legislative leaders close in on raise for teachers
Arizona teachers call for a strike; walkout at least a week away
#RedforEd surrenders; teachers should be back at work Thursday
Gov. Ducey unveils plan to get teachers pay hikes over next 3 years
Teachers lash out at Gov. Ducey for pay raises to aides