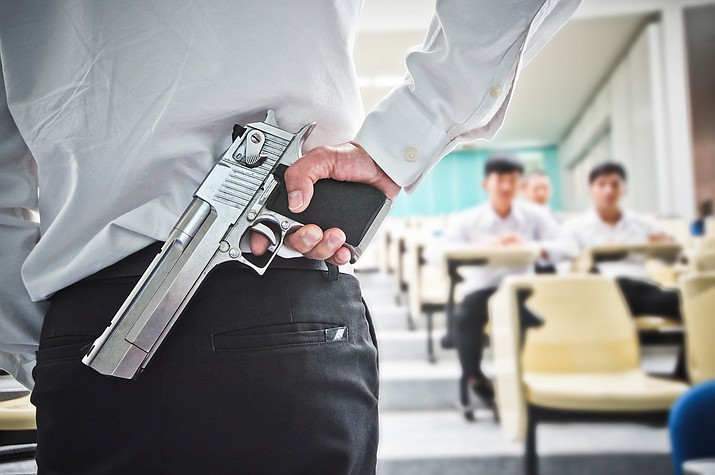 Legislators believe armed teachers and other school personnel can intervene quickly during a school shooting.

The idea is to train select teachers, principals or even janitors who would access a secured weapon and bulletproof vest and intervene quickly during a school shooting. Senate President Steve Yarbrough said he’s a big fan of a “school marshal” program.

“Because even a minute or two or three that you can get the active shooter to be worried about the school marshal, that’s just a lot fewer kids that he’s going to be shooting,” he said.

“This idea of school marshals has come up in a lot of states and has a lot of appeal among my caucus members, and I share that,” he said.

Ducey rolled out a school safety proposal two weeks ago, but so far no legislation has been introduced. Yarbrough said as of last Thursday he hasn’t seen any written proposal. Mesnard said the same on Monday.

Patrick Ptak, a spokesman for the Republican governor, said the school marshal proposal wasn’t included because it lacks backing from the law enforcement and education community.

Ducey’s plan includes more school resource officers and school mental health spending, a new way to remove guns from unstable people and technology fixes to get state reports into the federal gun background check system faster. The proposal was prompted by growing national attention to school safety after a Feb. 14 school shooting in Florida that left 17 dead and triggered protests from students across the nation.

He also proposed a program to encourage an “optional reserve system” of former law enforcement officers certified to carry firearms on campus.

Democrats want to add universal gun purchase background checks to Ducey’s plan. Rep. Rebecca Rios, the House minority leader, called the school marshal proposal a non-starter that would kill bipartisan support for the proposal. Anti-gun violence groups like Moms Demand Action, the Giffords Law Center and rallying students have made it clear they would not support such a proposal.

“They want less guns in school,” Rios said. “And so to give the authority to teachers to carry guns I think it’s a ridiculous non-starter for the House Democratic caucus.”

Rios said she could deliver at least 22 Democratic House votes to the governor if he backs universal background checks, meaning he only needs nine Republicans on board in that chamber. But she said Mesnard’s policy of only allowing Legislation with major GOP backing to come up for votes means that’s unlikely to happen.

Mesnard said he will try to get bipartisan consensus, but if Democrats refuse to budge he’ll do it alone and the proposal may include more they don’t like.

“If the Dems are not going to vote for anything because it does not go far enough in their view, then I think it opens up discussion among my caucus members,” he said.