Letter | J'Aime Morgaine: Why women should continue to march 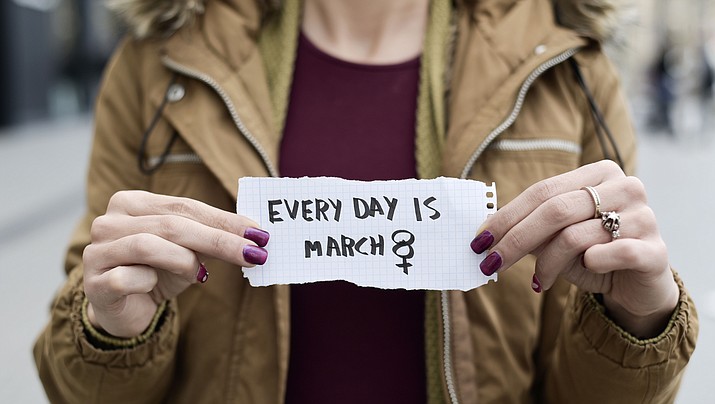 During the past few months of promoting the 2019 Mohave County Women’s March, it’s been interesting to see how many women believe there is no longer a need to march for women’s rights, believing that women have already achieved equality. So in honor of March as National Women’s History Month, here’s a reminder of why it’s more important than ever that we march.

My goodness, I’m old enough to remember when women could be fired for being pregnant, were unable to obtain a credit card without her husband’s approving signature, and I was enlisted in the Army under a completely different set of rules as a woman than what was required of the men.

Yes, there have been changes, but none of these gender equity improvements are constitutionally guaranteed. In fact, the women’s suffrage movement that led to the ratification of the 19th Amendment right for women to vote is the only part of the Constitution explicitly addressing women’s rights.

A law is subject to any number of factors that could precipitate change. They are laws; laws are interpreted and change all the time. Without expressed constitutional guarantees, there is nothing to protect the current laws from being rewritten or interpreted in ways that change, diminish, or even abolish the current freedoms these laws provide for women.

And for those who think this is not realistic, are you paying attention to current events?

Did you read about the recent discussion in the Arizona State Legislature about women’s menstrual periods because they have been allocated only twelve pads a month, then are punished for bleeding on their uniforms? What about the Arizona legislation introduced that forces doctors to report the reason why a woman has an abortion?

Or Debbie Lesko’s bill authorizing employers to demand women employees provide documentation that their birth control pills are being used for non-sexual reasons? And what about laws in other states that force women who have been raped to obtain consent of the rapist before she can abort the fetus, or if she chooses to keep the child must share custody/visitation of the child with the rapist?

This is just the tip of the iceberg of how women’s rights are slowly being eroded by the current trend of laws being introduced and passed without constitutional protections. And don’t even get me started on the #MeToo movement or military sexual trauma.

But the most important fact that women should be paying attention to is the number of conservative judges the current president is nominating for lifetime appointments. You may support this invisible revision of the judicial tenor because you want certain personal values or beliefs upheld by these conservative judges. But be forewarned, conservative women: your support may come back to bite you.

And without an explicit amendment protecting women’s unalienable rights, there are only the laws currently in place to provide that protection, laws subject to change and legal interpretation, laws with no explicit constitutional guarantee for women.

Arizona is one of the remaining 14 states that has not yet ratified the Equal Rights Amendment (ERA), so we need representatives who will fight for women’s rights and the ratification of the ERA. But we have State Rep. Paul Mosely, who didn’t even know what the ERA was, reportedly because that all happened before he was born.

Women’s History Month is such a vital reminder for women of where we started when this great nation was formed, and also how far we truly have come. But we still have a long way to go, baby. And so we march, and will keep on marching until our unalienable rights have constitutional protections, too.