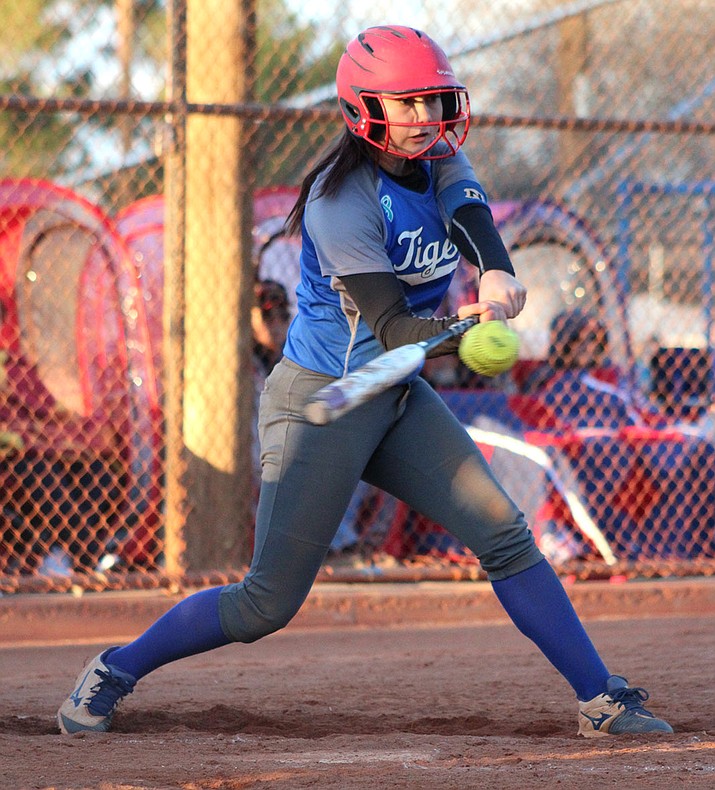 Academy's Randa Short was 2-for-3 with three RBIs, a triple and two runs scored in game one of a doubleheader Tuesday against Tonopah Valley.

KINGMAN – The Kingman Academy High School softball team easily took care of No. 36 ranked Tonopah Valley (3-10, 0-6 2A West) in a doubleheader Tuesday at Southside Park – winning Game 1 14-1 and taking the nightcap 14-0. Both games were called in the fifth inning due to the run rule.

Chloe Elliott and Randa Short led the Lady Tigers in Game 1 with three RBIs apiece. Short was 2-for-3 with a triple and two runs scored, while Elliott had a double to pace the offense. Dasani Cave rounded out the top performers by going 2-for-2 with two RBIs and two runs scored.

Academy’s Jessica Plew picked up the win in the circle after yielding no earned runs on three hits with 10 strikeouts and two walks in five innings of work.

Edwards narrowly missed a no-hitter after allowing just one hit with 10 strikeouts and one walk in five innings.

At Odyssey Institute, the Kingman High School softball team picked up its fourth 3A West region win of the season Tuesday in a 24-7 stomping of the No. 34 ranked Lady Minotaurs (1-13, 0-6).

At Centennial Park, the Lee Williams High School softball team dropped a 19-3 setback Tuesday to the No. 9 ranked Lady T-birds in five innings due to the run rule.

Mohave used a nine-run third inning to bust the game open, while the No. 28 ranked Lady Vols scored two runs in the first and one in the second.

At Southside Park, the Kingman Academy High School baseball team dispatched No. 43 ranked Tonopah Valley (1-12, 0-5 2A West Region) in a doubleheader Tuesday – taking the opener 13-3 and the nightcap by a score of 23-4. Both games only went to the fifth inning due to the run rule.

Donny Tatham led the Tigers in game one as he went 2-for 2 with four RBIs, a home run and a triple. Ryan Hurley also hit a homer and a double, while finishing 3-for-3 with two RBIs and two runs scored.

Brad Ogden rounded out the top performers with three RBIs, a double and a run scored.

Hurley yielded three earned runs on four hits with seven strikeouts and a walk in four innings of work, while Wyatt Hall pitched a perfect inning with one strikeout.

Odgen continued his successful day at the plate in the nightcap with a team-high five RBIs, three runs scored and a double.

Butler picked up the win on the mound after yielding two earned runs on two hits with one strikeout and two walks in two innings of work.

At Mohave, the Lee Williams High School baseball team picked up a 10-0 shutout Tuesday against the No. 24 ranked T-birds.

The 15th-ranked Volunteers used a five-run sixth inning to end the game in six innings due to the run rule.