Agencies express gratitude for their dispatchers 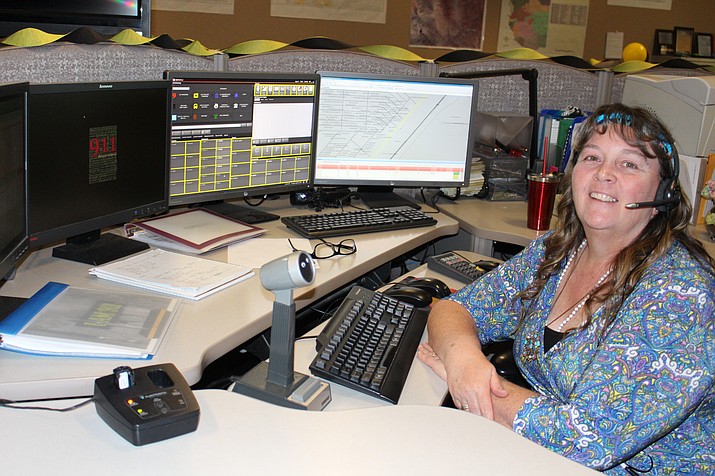 KINGMAN – When your house is going up in flames or someone’s trying to break into your home, you’re gushing with gratitude for 9-1-1 dispatchers who send firefighters, police and paramedics to your aid.

It’s people like Valerie Lester, senior dispatcher for Mohave County Sheriff’s Office, who are the initial point of contact for people in times of crisis and disaster.

She understands the urgency behind those calls. Her mother was a nurse and her father was a firefighter.

“I don’t like blood,” said Lester, who has been a dispatcher for the sheriff’s office for 5½ years. “This was my way of going into my family’s public service.”

The Association of Public Safety Communications Officials is honoring thousands of women and men who work the phones for public safety agencies this week.

“They’re our lifeline, for sure,” Undersheriff Ed Trafecanty said. “Even when I was on boat patrol, I had the utmost respect for them. They have one of the hardest jobs in the department. They’re also first responders, but not in person.”

The Kingman 9-1-1 communications center, a division of Kingman Fire Department, handled more than 56,000 calls for service in 2017, a 10 percent increase from two years ago, Fire Chief Jake Rhoades reported. Nearly three-fourths of the calls were for law enforcement.

“The communications center and its staff are a tremendous asset to the City of Kingman, as well as all surrounding areas as they deal with a variety of incidents and agencies at a moment’s notice,” Rhoades said.

While police officers and firefighters get all the accolades – and deservedly so – any successful outcome couldn’t happen without dispatchers, he added.

Kingman Mayor Monica Gates proclaimed the week of April 8-14 as National Public Safety Telecommunicators Week in Kingman to recognize the “diligence and professionalism” of the communications center staff.

The center started in March 2012 as a regional answering point for public safety in a renovated building downtown. It operates 24 hours a day, seven days a week with a staff of 16.

“Callers do not call 9-1-1 when they are having their best day ever,” McLeod related. “When they call us, they need help and they need it quickly. When I have a caller who is freaking out on the phone and I need information in order to send help, I use my empathetic mom voice to ask for their help.”

She focuses on empowering the caller to act, which in turns allows a dispatcher to obtain information necessary to send the right response.

“I personally have never failed to calm a caller down by simply asking them to take a deep breath and together we can help your loved one,” McLeod added.

Mohave County Sheriff’s Office has its own communications center with 16 dispatchers. Most of them are women, but four are men.

“Women are better multitaskers than men,” dispatcher Shelly Morris explained, which elicited a groan from a male colleague.

MCSO is celebrating the week with themed dress days, games and prizes, including a riddle scavenger hunt in which the clues to locating a prize come from solving the riddle. They’re being treated to lunch by local businesses and having a potluck dinner on Saturday.

Lester, who took the lead on organizing activities for the week, said she’s received donations from businesses including gift baskets, dinner certificates, free bowling and haircuts.

“In this line of work, you can use all the morale boost you can get,” Lester said. “We deal with really stressful stuff. People call at critical moments and it can take its toll.”

McLeod of KFD said she copes with the stress and emotions after taking a call by remembering that she did not create the emergency and cannot control the outcome.

“These things are left to a higher power,” she said. “What I can control is doing my job, sending help quickly and doing no harm in the process. At the end of a long shift filled with shots fired, babies not breathing, suicidal callers and horrific accidents, there is satisfaction in knowing I did my job to the best of my ability.”

“This makes this duty even more difficult as responders may arrive on a scene and find a completely different situation, but I can attest that many of us would not want to be in that seat, making those decisions,” he said.

Help Them Help You | Emergency dispatchers must gather specific information from callers before help can arrive
911 dispatchers launch new, improved system today
911 dispatchers have a lot to handle and are prepared to deal with anything
Celebrating Workers this Labor Day: ‘You provide a service and save people’s lives’
Fire chief reminds residents to call 911, not departments