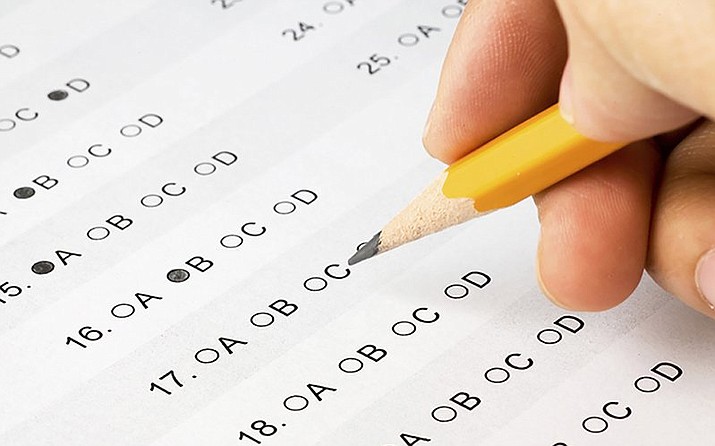 Arizona fourth- and eighth-graders fell short of national averages on a biennial test of math and reading skills, but state officials noted that scores for those grades have improved steadily over the past decade. (Photo by Alberto G/Creative Commons)

WASHINGTON – Math and reading test scores for Arizona’s fourth- and eighth-grade students fell below their peers nationally in 2017, according to a national student achievement report released Tuesday.

The National Assessment of Educational Progress scores showed that Arizona students matched the national average for eighth-grade students in math, but fell below the nation in the other three assessments.

And even where they matched the nation, they fell short. Fewer than half of the scores nationally were considered proficient, which requires a score of 250 on the 500-point standardized tests.

The numbers were much the same in the fourth grade, where 34 percent of Arizona students were considered proficient or better in math last year, compared to 40 percent for the rest of the country. The percent of fourth-graders who were proficient in reading was 30 percent in the state and 35 percent in the U.S.

Measured against itself, the state scores were mixed. Fourth-grade math scores fell four points from 2015, the last year the tests were given. But the other test results stayed the same or, in the case of eighth-grade math, inched up a point.

Arizona Superintendent of Public Instruction Diane Douglas downplayed the national numbers, saying it is better to compare the state’s results against prior years. She noted that over the past decade, the math and reading scores for fourth and eighth grade have all improved.

“I am pleased to see the continuing upward trend in the test scores of Arizona students,” Douglas said in a statement released by her office Tuesday. “But we also see the negative impact that occurs when we experiment with our children’s education as we did with the Common Core standards. I am excited to see how the adoption of our new Arizona standards will benefit our students’ scores going forward.”

Nationally, reading scores for eighth-graders improved slightly, but results on all the other tests were largely unchanged from 2015. U.S. Education Secretary Betsy DeVos said the nation must do better to close the widening gap between high- and low-performing students “despite billions in federal funding designated specifically to help close it.”

“The report card is in, and the results are clear: We can and we must do better for America’s students,” DeVos said in a statement Tuesday. “Our nation’s reading and math scores continue to stagnate.”

But Heidi Vega, communications director for the Arizona School Boards Association, said the NAEP scores are not necessarily an accurate representation of student success. She said other assessments for the state, such as AZMerit, can provide more accurate and inclusive results.

“ASBA doesn’t generally use the NAEP scores because it only focuses on a sample of students and not the true number of students enrolled in public schools,” Vega said.

“While we value benchmarking our students to other states and closing the gaps in student subgroups, we firmly believe a more consistent snapshot of student achievement comes from AZMerit results from the Arizona Department of Education,” she said.