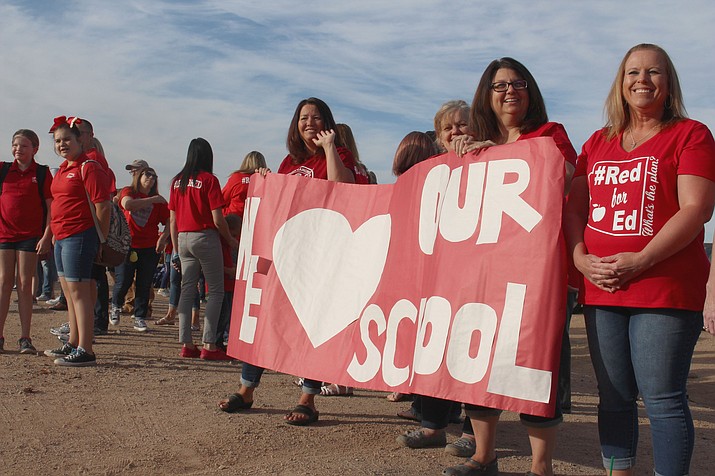 Teachers outside Kingman Academy High School holding up a banner that says “We love our school” as cars pass by to drop off students for school. (Photo by Vanessa Espinoza/Daily Miner)

PHOENIX – Many educators were skeptical Friday of Gov. Doug Ducey’s plan to raise teacher salaries by 20 percent, and some lawmakers – who said they had not been briefed on the specifics of the plan – called the proposal a step in the right direction.

However, they’re withholding judgement until the governor gives them more details next week. The main question is, where will the money come from if Ducey is determined to hold the line on taxes.

“We didn’t have too much of a notice that he was going to be unveiling his plan, maybe a couple of hours,” said Sen. Sylvia Allen, R-Flagstaff, who chairs the Senate Education Committee. “As senators, we are trying to see how we could direct money. I think some of our plans were at a slower pace than what the governor’s wanting to do, but it was all geared to getting a 20 percent (increase).”

Ducey announced his plan Thursday to increase teacher salaries by about 20 percent by 2020. The governor said he believes increases in state revenue would offset the cost, meaning no tax increases for Arizona residents. But some lawmakers say his plan is optimistic.

“We are basing the future raises (or) increases that the governor is talking about on the continued 3 to 4 percent growth that our state has been having the last few years,” Allen said. “I think he’s very optimistic and thinks that this will happen. If not, the future legislators that have to deal with this will have to see what to do, because we’ll have to keep those promises.”

She said optimism and economic growth may not be enough, forcing the Legislature to make budget cuts in other places to prevent a tax increase.

“I’ve got to see how the governor thinks we can do that. What is it we are going to be reducing to do that,” Allen said. “The Legislature is in charge of the budget. Constitutionally, we have that responsibility. And the governor can propose what he proposes, but in the end he’s got to have the will of the Legislature.”

Some state Democrats believe Ducey’s Thursday announcement was a publicity stunt to keep teachers from walking out, a move they are considering.

“We saw a governor who got nervous about this. He saw that he wasn’t gaining ground politically because of this,” said Sen. Martín Quezada, D-Glendale. “He scrambled and he tried to find a way to calm those fears of the people.”