Arizona teachers call for a strike; walkout at least a week away 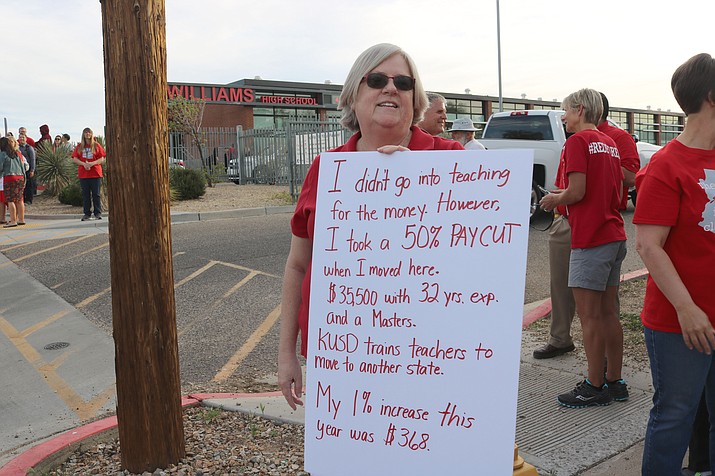 Lee Williams teacher Pam Cochran holds up a sign that summarizes her 32 years of teaching experience and only getting paid $35,500 a year with a master’s degree during a recent walk in.

PHOENIX – Claiming overwhelming support, leaders of the #RedForEd movement Thursday night called for a strike – but not for another week.

Joe Thomas, president of the Arizona Education Association, said 78 percent of the more than 57,000 ballots cast during the past three days were in favor of walking out.

"This is undeniably and clearly a mandate for action,'' he said.

But Noah Karvelis, who helped found Arizona Educators United, said teachers and support staff will remain on the job, at least through Wednesday.

"We need to give our communities time to prepare,'' he said. Thursday, he said they will walk out.

Roger Jacks, Kingman Unified School District superintendent, prepared a letter to be sent home to parents warning about the possibility of a walkout. He said KUSD “plan(s) on keeping critical dates such as high school graduation, AP testing, Cambridge testing as scheduled. We will work with our high schools and the AIA to try and continue varsity sports.”

"No one wants to see teachers strike,'' he said in a prepared statement. "If schools shut down, our kids are the ones who will lose out.''

And the governor repeated his pledge to push to increase salaries by 19 percent over current levels within three years.

In some ways the tally is not a surprise.

Leaders of both the AEA and AEU called for the vote, declaring that Ducey's offer falls short.

Part of that is because it fails to include support staff, from reading specialists to custodians and bus drivers. The also said Ducey rejected their request to oppose new tax cuts until teacher salaries reach the national median, with the governor's offer coming up short of that point.

They also demanded the state restore other funds that have been cut from schools during the past decade as lawmakers have enacted tax cuts even during the recession. Even Ducey's office has acknowledged that state aid on a per-student basis is currently less than it was a decade ago, even before the effects of inflation are considered.

The administration at Kingman Academy of Learning is ready to do its best to keep its schools functioning.

“The most important thing is to keep school open because we are an education institution, we need to educate children,” said Susan Chan, executive director of KAOL. “I would be speechless (if there is a strike). We have administrators that can step in.”

Finally there is the question of whether the money will be there.

Ducey insists that a growing economy will bring in more tax dollars and reduce spending on social services. He also proposes to move money out of other accounts and not fund some budget requests.

But even legislative budget staffers found what they said are flaws in the governor's number crunching, coming up with their own estimate that the price tag for Ducey's school funding plans would leave the state $265 million in the red by 2020.

That drew a sharp retort from gubernatorial spokesman Daniel Scarpinato, calling those conclusions "based on one faulty analysis that underestimates the amount of revenue growth in the state.'' And he said legislative budget staffers are wrong in presuming that the higher revenue growth through March is a one-time event and cannot be sustained.

Those estimates raise the possibility that even if educators accept Ducey's offer he could not get it approved by the Republican-controlled Legislature.

The groups did not disclose how many of the votes came from the two major metropolitan areas. There had been talk of opposition from some rural educators concerned about parental backlash.

Karvelis pronounced himself unconcerned given the overwhelming margin of support statewide.

Whether or not all the teachers walkout at KUSD's schools will determine how that district handles the crisis.

“If they do we would have to assess our ability to keep the schools open based on the number of teachers going on strike,” Jacks said. “The tipping point would be how many teachers can be out and how many we can supplement with substitutes.”

Less clear is how quickly lawmakers and the governor could act on the demands -- assuming they want to -- and where they would get the money.

Thomas said it starts with legislators refusing to enact future tax cuts and rescinding some of those that have been granted during the past decade, including a 30 percent cut in corporate income tax rates. He also said all people should be made to pay their fair share, hinting at prior suggestions for a surcharge on the highest wage earners.

He also acknowledged it would take a two-thirds vote of lawmakers either to hike taxes or roll back prior tax cuts. Thomas said lawmakers can come up with that margin if they have the will.

But ultimately, he said, it's not up to educators to come up with a solution.

Karvelis also sidestepped questions of how long teachers are prepared to stay out, particularly with the prospect it could keep high school seniors from graduating.

"The worst possible thing we could do is not take action right now,'' he said.

A rejection of Ducey's statement and the call for a strike carries some risks.

Most immediate is that teachers who abandon their posts run the risk of having their contracts terminated and, ultimately, losing their teaching certificates.

But there also are lawmakers who have been less than sympathetic with teacher demands for a 20 percent pay hike and who would likely be just as happy to scrap that proposal.

In a floor speech earlier this month, Rep. Anthony Kern, R-Glendale, said U.S. Bureau of Labor Statistics lists the average salary for all Arizona workers at $48,160. And he said average salaries for teachers range from $43,670 for middle school teachers to $44,220 for elementary school and $48,050 for high school teachers.

Kern also pointed out that the legislative decision to extend the 0.6-cent sales tax beyond 2020 will free up another $64 million a year for salaries, a figure he translated out to about $1,315 per teacher.

"I want those numbers to kind of sink in,'' he told colleagues, saying it will put teacher pay "well above the wage that most Arizonans make in this state.''

All that, in turn, leads to the possibility that the public support that has empowered the #RedForEd movement could evaporate if voters see the teachers as greedy or ungrateful.

It was that support that effectively forced Ducey to craft the offer. After all, the budget he proposed in January included just a 1 percent pay hike for teachers.

Ducey has the support of several of the older traditional education groups.

Tim Ogle, executive director of the Arizona School Boards Association, pointed out that the governor's offer was not strictly limited to teacher pay hikes.

That is the account that schools can use for certain kinds of capital expenditures like computers, books and school buses. Funding had been eliminated during the recession as lawmakers and governors – including Ducey himself – raided that account to balance the state's books.

Ducey has promised to restore the full $371 million within five years. And he has said that schools, which have been using operating funds for those capital needs, would now have more cash for other priorities, including pay hikes for support staff.

But Ducey's offer of capital funds was not entirely voluntary.

Several school districts have filed suit asking a judge to declare the failure to fund that account is illegal. And efforts by the state to have that lawsuit dismissed have been rejected.

Others, however, have sided with teachers, agreeing with their assessment that the governor's plan to finance the $670 million cost of the pay hikes and the $371 million for those capital needs is not financially sustainable.

Ducey is counting on strong employment and tax collections and fewer people needing state services to leave funds available. But he also is moving funds around from other state programs and scrapping some requests by agencies from what they say are needed dollars.

“I know that education in Arizona is frustrating. Teachers don’t get paid what they are worth,” Chan said. “The things we get asked to do by the government is unbelievable.”