Teachers use social media in US uprisings, fight for funding 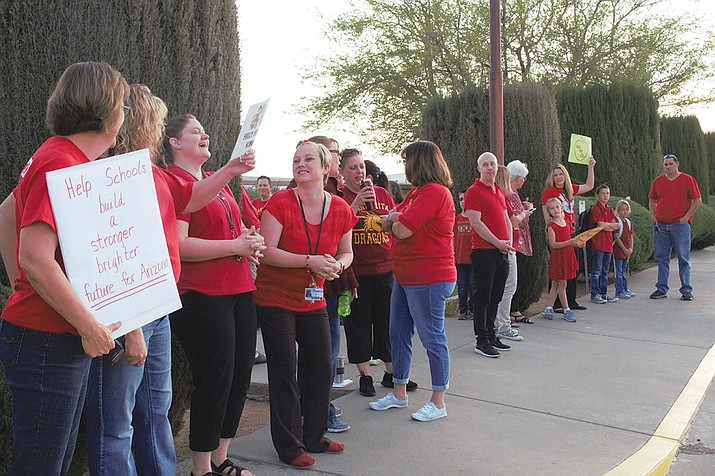 Teachers protesting outside of Manzanita Elementary spreading awareness to the community about low education funding in the state of Arizona.

Teachers, long tired of low wages and a dearth of state funding, begin talking to each other online.

Their Facebook groups draw tens of thousands of members. They share stories of their frustrations and then they demand change.

"We had no idea it would light a fire under people," Brewer said.

Educators communicating online played a key role in forming grassroots groups that are storming statehouses and holding demonstrations. It started in West Virginia, where two teachers set up a private Facebook page last fall that grew to 24,000 members. The group provided a private forum for educators to plot strategy, bolster resistance and plan demonstrations. After they went on strike and won a pay raise, educators elsewhere took notice.

Jennifer Grygiel, a communications and social media professor at Syracuse University, said people are increasingly realizing they can coordinate online for social causes, such as the #MeToo movement. Engaging online can also be a way for people to form their own identities, she said. "It's where we congregate now."

Most recently, the group used Facebook Live to share news of a planned vote on whether to strike in their quest for a 20-percent raise and more than $1 billion in new education funding. Voting started Tuesday after Gov. Doug Ducey has put forward a proposal to raise salaries 20 percent by 2020 and the voting was scheduled to end Thursday.

The online genesis of the Arizona movement cropped up outside of organized labor. But Arizona Education Association President Joe Thomas said the union stands in solidary with the grassroots group. He spoke at a rally where Arizona Educators United unveiled their demands, joined them in a letter to Ducey asking for a meeting, and appeared in a video on the Facebook page.

He called Arizona Educators United a "breath of fresh air" in the fight for higher education funding.

"It shares the same purpose, and that's why I think we can stand so easily next to each other," he said. "I've said multiple times, 'I don't care who throws the touchdown, I want to win the game.'"

Tammy Custis has been acting as a site liaison for Arizona Educators at the school where she teaches in Peoria. In addition to staying tuned into the main Facebook group and a few other discussion pages, she's using communication apps to stay in touch with teachers at her school about organizing efforts so they don't have to use district resources. Online platforms have been key to staying connected, she said.

"It's amazing how engaged these already-so-busy-teachers are in this fight," she said. "They are finding a way to get their teaching done, and still finding time to have a voice."

In Oklahoma, eighth-grade history teacher Alberto Morejon in early March founded the Facebook group supporting a teacher walk-out that's now being used by about 80,000 teachers. Morejon, who said he doesn't belong to a union, is continuing to push for new funding for public education.

"We're going to keep showing up until they do something," he said.

Once it started, the group grew quickly; within six hours of adding members to the newly created group, it had 17,000 members.

"I think it shows there's a problem, and it needs to be fixed," Morejon said.