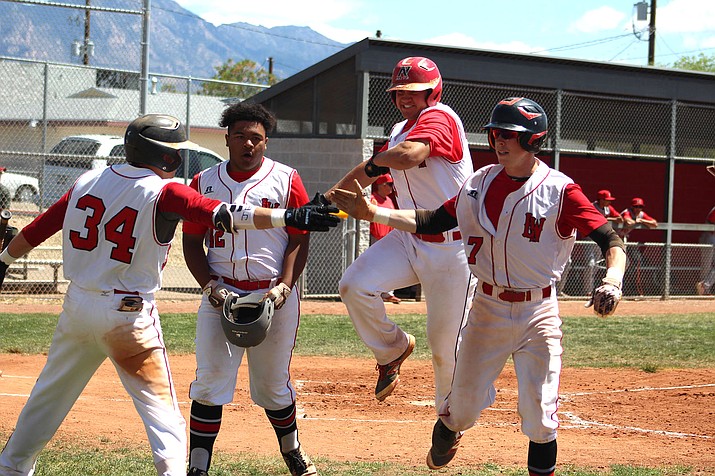 From left, Lee Williams’ Paul Giglio, Addis Guzman, Matt Bathauer and Carter Rhoades high five each other Friday during a 13-2 win in game one of a doubleheader against Mingus.

KINGMAN – The Lee Williams High School baseball team knew what it needed to do Friday against Mingus – win both ends of a doubleheader to clinch the 4A Grand Canyon Region. The Volunteers did just that and in grand fashion with a 13-2 win in five innings and a 12-7 victory in the nightcap at Dick Grounds Field.

The Vols celebrate after a 12-7 victory in the nightcap that clinched the 4A Grand Canyon Region title.

“We knew coming in that we had a great shot at winning the region and being in both games today,” said Lee Williams senior Chad Moore. “We came out with a lot of heart and a lot of effort, put the bat on the ball, and we made things happen.”

The celebration was in full force after the final out and Moore described it as the greatest feeling. It was no doubt the best way to end the regular season, especially for the five players that will soon graduate.

“It’s a great honor for all these seniors,” said Lee Williams’ Paul Giglio. “We worked our butts off in the offseason and the whole season for this. I just can’t thank the coaches and my teammates enough. I’m so proud of this whole team and I can’t wait to get to the playoffs. I’m so excited.”

The excitement started early in the day as the Vols began their offensive onslaught in game one – putting up four runs in the first inning and eight more in the second frame. Lee Williams added one more in the fourth and held off a late Marauders run in the top of the fifth to win it.

Giglio, Carter Rhoades and Matt Bathauer led the way with three hits apiece, while Moore finished with a game-high four RBIs. Bathauer also drove in three runs, while Giglio and Rhodes each finished with a pair of RBIs.

“We were focused at the plate today and had good approaches,” said Vols head coach Patrick O’Boyle. “They threw it over the plate and we hit it. They did a good job of making an effort to keep us off balance. We had a couple of good hits – timely hits – and we were able to stay aggressive on the base paths.”

Lee Williams had to fight a little harder in the nightcap though, as Mingus put up four runs in the top of the first. The Vols didn’t let the deficit bother them – responding with seven runs to regain the momentum.

“We preach just staying focused and staying within ourselves,” O’Boyle said. “Mingus did a nice job in that second game of putting up four right away, but we didn’t panic. We put together at-bat after at-bat and we just started putting runs together.”

Lee Williams followed its seven-run first inning with two runs in the second and three more in the third frame. That was enough to hold off the Marauders and give the Vols the 4A Grand Canyon Region crown.

“We felt really comfortable after the first game when we put up 13,” Moore said. “Like coach was saying in the first game – ‘Just go out there and hit the ball, compete, put it in play and good things happen for us.’ It’s a great feeling.”

Bathauer led the way in the nightcap with three hits and three RBIs. He connected on a two-run double in the first and followed it up with an RBI double in the second. Giglio added a double and a triple and drove in two runs, while Addis Guzman finished with two RBIs.

Rhoades picked up the win after yielding five earned runs on seven hits with six strikeouts and three walks in five innings of work.

“We had a great week of practice and we knew what we needed to get done,” O’Boyle said. “We knew we had to get a sweep in order to have a chance to win the region. That’s what we came out here and did.”