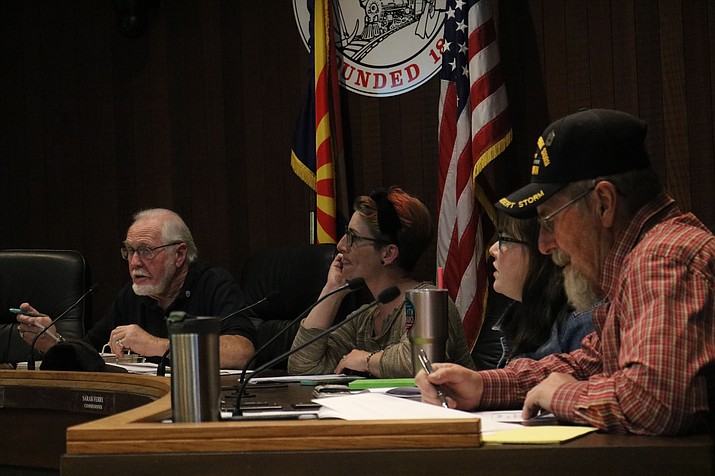 KINGMAN – Council addressed that recycling in Kingman isn’t cut and dry at its meeting Tuesday, and noted there are many variables that need to be considered before the program is dropped or expanded.

The Clean City Commission discussed the curbside recycling pilot program at its meeting Thursday after being directed to do so by Council. However, details of the program and the potential for expansion will remain on the commission agenda for the next several months until it has enough information to make a recommendation to Council about recycling’s future in Kingman.

The commission was presented with program data from November to March. The pilot included curbside recycling for 550 homes in the Walleck Ranch and Legacy neighborhoods, about 5 percent of the 11,000 homes utilizing sanitation in Kingman.

About 3,000 pounds of recyclables were collected each month from those areas during the pilot, with about 44 percent participation.

“It was a single-stream collection, which makes it easier for people to recycle because they’re not sorting, they’re just throwing everything in the can,” said Rob Owen, Public Works director. “The other side of that is it takes us longer to sort.”

Utilizing inmate labor, about three individuals, took about a day and a half to sort the recyclables to get them ready for transport to Las Vegas. Along with sort time,transport cost was another hindrance to curbside recycling.

Owen explained that Kingman sanitation transported plastics to Las Vegas twice a week in a 228 mile round trip, which takes about five hours. With labor and equipment charges, each trip cost about $581 on top of tipping fees for plastics, from $25 to $50 per ton.

Pickup of recyclables at the pilot locations are continuing until CCC has enough information to make a recommendation to Council. If the program continues outside of pilot status, it would most likely be extended citywide.

Another issue facing the program is that the market for recyclables is “nonexistent” Owen explained. Waste management at Bulldog Disposal and Recycling doesn’t want the city’s plastics because of that nonexistent market, which is why Kingman is transporting recyclables to Las Vegas.

“Do you think if the market turns around, and there is a market for recyclables, that this would be a viable program citywide that would sustain itself?” asked C. Russell, commission Chair.

“I think we’d have to do a rate study,” Owen responded. “We’ve actually budgeted for that next year …”

Because of cost and manpower associated with transporting recyclables to Las Vegas, the commission and staff agreed that expansion would most likely require Kingman to have its own, or through partnerships, Material Recovery Facility (MRF).

“We’re going to need a processing center to be able to take this to, whether it be a joint venture, or we take it to a third party and we have to take those tipping fees to get it there, and then from that point on it becomes their baby to haul it to wherever they want to,” said Rich Ruggles, City liaison. “So there are a lot of obstacles, and I think with this year coming and the rate study we’re going to do, we’ll be able to get more information on that.”

Owen explained expanding recycling citywide and the associated sorting, cost and disposal components of expansion would be factored into that study.

Owen said the goal is for CCC to give a recommendation to Council by June or July.