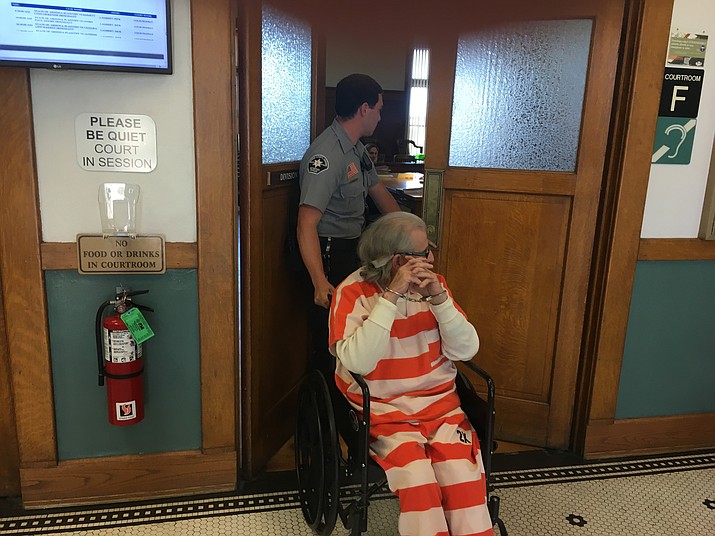 Alfredo Blanco, charged with first-degree murder of real estate agent Sidney Cranston Jr., is wheeled into court at a previous hearing. His trial is scheduled for Sept. 25.

KINGMAN – The first-degree murder trial for Alfredo Blanco, accused of killing real estate agent Sidney Cranston Jr., remains on track for Sept. 25, with a status conference set for May 29 and final management hearing set for Sept. 10.

Jacob Chavez, representing the defendant, said he spoke with the secretary of lead defense attorney Robin Puchek, and was informed that the defense is still conducting and completing interviews.

Meanwhile, attorney David Wayt told the judge that the prosecutor assigned to the case will file a motion in limine, which is a request that the judge exclude certain testimony and evidence during the trial.

Blanco is charged with killing Cranston in June 2015 and burying his body on a ranch about 20 miles east of Kingman. Cranston’s body was discovered in January 2017, and Blanco was arrested a couple days later at a rehabilitation home in the Phoenix area.

He has pleaded not guilty to first-degree murder, concealment of a dead body and tampering with evidence. Blanco worked for Cranston as a property manager and had collected $1,600 in rent prior to Cranston’s disappearance.

William Sanders, an acquaintance of Blanco who led police to Cranston’s body, will be one of the key witnesses. He’s charged with concealment of a dead body and tampering with physical evidence.

Judge Lambert played an 18-minute police interview with Blanco conducted at the rehab facility during an evidentiary hearing in March, and denied a motion by defense to suppress Blanco’s statements.

Puchek had argued that police tried to “trick” Blanco into confessing to the crime, and did not read his Miranda rights during what was essentially a “custodial interrogation.” At least twice during the interview, Blanco asked to have a lawyer, Puckek noted.

Lambert ruled that it was not a “custodial interrogation” because Blanco was free to end the interview at any time and leave the room, which he eventually did.