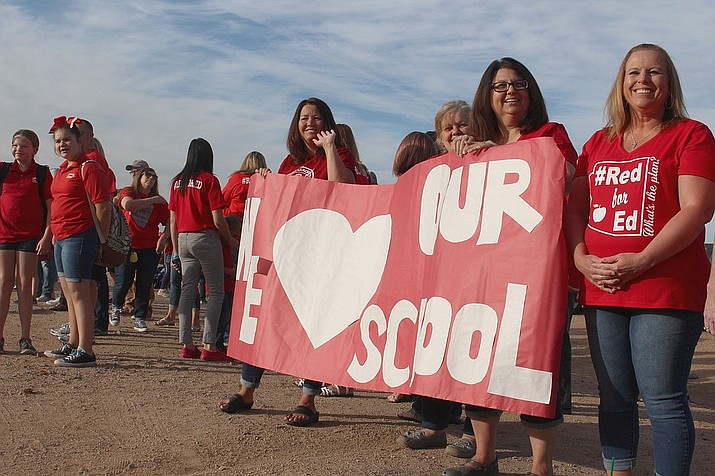 The Republican governor has stuck to his plan to increase teacher pay 20 percent by 2020 after educators voted to walk off the job Thursday because it didn’t include an overall boost in school funding or raises for support staff. The GOP-dominant Legislature and others are wary of how the state will pay for the plan.

Ducey, who is running for re-election, has sent a message to lawmakers, vetoing 10 pieces of Republican legislation last week to show that he wants serious discussions on a state budget that implements his proposal. Legislative leaders say it’s unlikely they will reach an agreement before the strike.

The political dealing comes as Arizona teachers, among the lowest-paid in the U.S., ramp up a grass-roots effort that spurred weeks of protests and joined a national movement for higher salaries. It started in West Virginia, where a strike garnered a raise, and spread to Oklahoma, Kentucky and most recently Colorado.

Over a half dozen Colorado school districts, including the three largest, are canceling classes or sending students home Thursday and Friday because of planned teacher protests.

In Arizona, teachers are keeping up demonstrations before school and lining busy streets during rush hour as the walkout nears. Car windows throughout the Phoenix area are scrawled with supportive messages, and businesses have put up signs backing the so-called #RedforEd campaign.

But teachers could face consequences in this right-to-work state, where unions do not collectively bargain with school districts and representation is not mandatory.

The Arizona Education Association, the largest teacher membership group, has warned its 20,000 members about a 1971 Arizona attorney general opinion saying a statewide strike would be illegal under common law and participants could lose their teaching credentials.

No school district has said they would fire educators who strike or revoke teaching certificates.

Hundreds of school districts and parents were scrambling this week to figure out how to handle a walkout.

Some large districts – including Mesa Public Schools in suburban Phoenix, the state’s largest – have already said they are going to close all schools Thursday and until the walkout ends. That means hourly employees, such as custodians, would not work or be paid.

Kingman Unified School District in a letter to parents said all schools except for La Senita would close on Thursday. Kingman Academy of Learning has only released a letter dated Friday in which it said the district is uncertain as to how Thursday will play out.

The closures could leave parents struggling to make child care plans. Some organizations, like the Arizona Science Center in Phoenix, are hosting day camps where parents can send their children.

Local parent-teacher associations also were working to ensure that students who rely on free breakfast and lunch at school can receive meals.

“I think if it was just the Senate that had to agree on the result we could do it this week,” Kavanagh said. “But given that we need the House and the governor to go along with this, this week is probably overly optimistic.”

Ducey spokesman Daniel Scarpinato said the governor is working with lawmakers and plans to meet this week with Democrats, who are usually left out of budget talks. Ducey will not meet with teachers.

Republican lawmakers and teachers groups are concerned about the rosy revenue projections Ducey is using to cover the pay raise, which will cost $650 million by 2020.

“I think the Senate’s going to come out with a funding version and other parts of the budget adjusted to make us feel a little more secure in the long-term revenue projections,” Kavanagh said. “We’re a little concerned about the out years, and we’ll try to make some modifications to deal with that.”