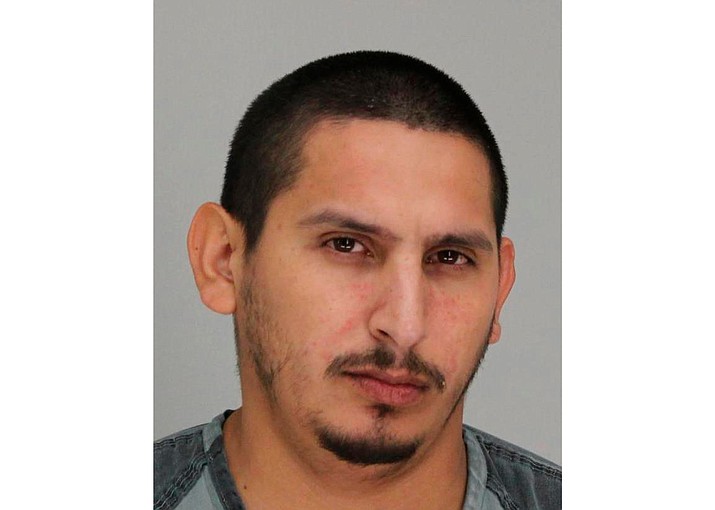 This undated photo provided by the Dallas County Sheriff's Department shows Armando Juarez. Juarez is accused of shooting and critically wounding multiple Dallas police officers and hurting an employee at a Home Depot store as he led law enforcement on a high-speed car chase before he was captured in a late-night arrest Tuesday, April 24, 2018. Police arrested Juarez on charges of aggravated assault on a public servant and felony theft. (Dallas County Sheriff's Department)

DALLAS (AP) — The gunman accused of opening fire at a Dallas home improvement store — killing one police officer and critically injuring two others — was initially detained because he was acting suspiciously and may have tried to steal from the store, an arrest warrant revealed Wednesday.

An off-duty officer who was working a part-time job at the Home Depot store in the north of the city learned Armando Luis Juarez, 29, had an outstanding felony warrant after he was detained by store officials for suspected shoplifting, according to the arrest warrant.

Two on-duty officers, Rogelio Santander and Crystal Almeida, were called to the store and, along with a Home Depot loss-prevention officer, were speaking with Juarez in an office. The off-duty officer stepped away, heard a report of "shots fired" broadcast over the police radio and then rushed back to the office to find the officers and loss-prevention employee on the ground with gunshot wounds, according to the warrant.

Investigators later reviewed police body-camera footage that showed Juarez pulling a handgun from his pocket as Santander and Almeida attempted to take him into custody, the warrant alleges.

Santander died Wednesday of his injuries and Almeida and the loss-prevention officer, Scott Painter, were in critical condition.

Juarez was arrested late Tuesday on charges of aggravated assault on a public servant and felony theft. He was subsequently charged with capital murder. Juarez was being held on a bond in excess of $1 million at the Dallas County jail.

"This is going to be a trying time for us, so we're just asking you for your support at this time," Hall said.

Police were called to the Home Depot in Lake Highlands at around 4 p.m. Tuesday to remove Juarez from the store. Hours after he escaped, his white pickup truck was spotted by police and a high-speed chase ensued, eventually resulting in his capture just before 10 p.m.

Dallas Mayor Mike Rawlings said late Tuesday that he was "upset at the lack of respect for our police in this city and in our country."

The next day, speaking at a city council meeting, Rawlings said, "I hope that we have a degree of respect and honor for our police and first responders today in everything that we do."

In 2016, four Dallas police officers and a transit officer were shot dead by a sniper in an ambush that came toward the end of a peaceful protest over the police killings of black men in other cities.

Relatives of Juarez said they couldn't believe he would be involved in such a violent episode.

"There's no way my son could've done this," Ruben Juarez told The Dallas Morning News, adding that he didn't think his son owned any guns.

Armando Juarez's grandmother, Janie Longoria, told reporters Tuesday that her grandson is a "sweet, lovable person," but that his friends are a bad influence.

Juarez was arrested in January on a charge of unlawful use of a motor vehicle after authorities say he was found in a stolen vehicle. He also pleaded guilty to a drug-possession charge.

"And I told him to stay away from those people," Juarez's grandmother said.

A Home Depot spokesman told The Associated Press on Wednesday that the shooting sent a wave of horror through the home improvement store chain's corporate headquarters in Atlanta.

"We're heartbroken," said spokesman Stephen Holmes. He added that the chain's leadership team has been actively supporting Painter's family and offering counseling to his co-workers.

Otherwise, Holmes said the company is referring to police all questions about the shooting and the run-up to it.