Ducey, legislative leaders close in on raise for teachers
Package teachers are demanding with walkout not being addressed 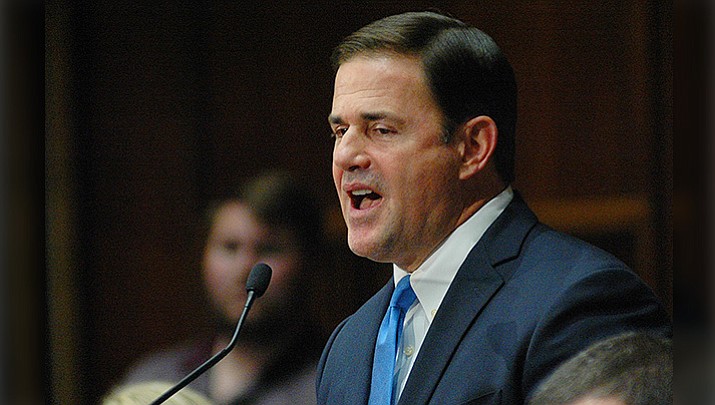 PHOENIX – Republican legislative leaders were closing in on a deal late Thursday to give Gov. Doug Ducey the pay hike he wants for teachers, some changes to the $10.1 billion budget sought by GOP lawmakers – but not the package being demanded by tens of thousands of educators who walked off the job.

The plan is to provide Ducey with the 19 percent increase for teacher pay – he says it’s 20 percent if you count the 1 percent salary hike already in this year’s paychecks – in exchange for some savings on other programs that some legislators do not consider priorities. It also means that lawmakers will not demand that Ducey provide a dedicated revenue source for the more than $1 billion price tag for his entire education package.

But it remains to be seen whether the plan, set to be formally introduced Monday, can get the necessary votes.

The proposal came on the heels of Ducey, unable to stop tens of thousands of educators from striking Thursday and rallying at the Capitol, refocused his aim to instead pressure members of his own Republican Party to approve his pay hike proposal – and his plan to fund it largely through anticipated economic growth.

Ducey, in a series of appearances on morning news shows Thursday, repeated his contention that his plan to boost teacher pay by 19 percent by the 2020-2021 school year at a cost of $670 million is financially viable. And he said that is not affected by a separate promise to finally restore $371 million a year within five years that schools are supposed to get – but have not been getting – for other capital needs like books, computers, buses and minor repairs.

Until now, Republicans who control both the House and Senate have been balking, saying they’re not convinced that the dollars will be there, particularly in future years.

So Ducey responded by been publicizing the Legislature’s web site – www.azleg.gov – with the idea that members of the public should look up their lawmakers and send them a message to approve his plan.

“We need your help to make it a reality,’’ the governor said in a statement. “Call your legislator and tell them to vote ‘yes’ on a 20 percent pay raise for Arizona teachers.’’

While there may be enough GOP votes for the package, none of this is likely to satisfy members of the #RedForEd movement, which drew more than 50,000 supporters to rally at the Capitol.

Some of it is that the governor remains adamant that he will not talk with Noah Karvelis, one of the founders of Arizona Educators United, or Joe Thomas, president of the Arizona Education Association.

“I’m not ignoring anyone,’’ Ducey insisted, saying he has met with individual educators. Press aide Daniel Scarpinato said that continued Thursday, with Ducey inviting 10 teachers, counselors and others up so the governor could listen to their concerns, explain his plan and say he’s committed to getting it through the Legislature.

But out on the Capitol lawn, Thomas pointed out that Ducey’s plan, even if properly funded, provides for a pay hike solely for classroom teachers. Left out are support staff like counselors, custodians, bus drivers and teaching aides.

The governor has argued that the $371 million being restored in school district assistance during the next five years, including $100 million this coming year, comes without strings. He said that gives school officials sufficient latitude to provide raises for those who are not teachers.

“The governor thinks he’s going to buy enough of you off that you’ll shut up and go back to the classroom,’’ he said. And Thomas said nothing the governor is offering deals with other demands, like restoring the cuts that have been made in state funding to education that currently leaves per-student funding in Arizona below where it was a decade ago, even before inflation is taken into account.

It isn’t just the educators and some lawmakers from both parties who contend that the kind of raise Ducey is proposing – assuming that’s all that gets funded – requires a dedicated source of revenue.

Lack of revenues aside, Brewer said one big flaw in what Ducey is trying to sell is that it is a concept – and one hastily drafted at that – which has yet to be reduced to an actual written proposal. Instead, Ducey went from defending his original plan for a 1 percent pay hike on April 11 to unveiling and promoting this three-step plan just two days later, all without actual legislation.

More to the point, she said, any proposal by the current administration needs to be credible, something the governor and his aides can “explain to the public.’’

While Ducey is trying to line up votes among the GOP lawmakers who control both the House and Senate, Sen. Steve Farley, D-Tucson, warned colleagues of a potentially unintended effect if lawmakers approve the additional dollars that the governor wants.

He pointed out that voters in 2016 approved Proposition 123. Designed to settle a lawsuit over the failure of the state to meet its constitutional obligation to increase state aid annually to keep pace with inflation, it will add $3.5 billion between now and 2025.

But that measure contains a poison pill of sorts: It put a provision in the Arizona Constitution to say that, beginning in 2024, lawmakers would no longer have to finance inflation increases if K-12 funding exceeds 49 percent of the state budget.

And if it hits 50 percent, the Legislature actually can cut state aid to schools.

Farley said an analysis of Ducey’s plan by legislative budget staffers show that by the 2020-2021 school year aid to education will hit 48.6 percent. And that’s presuming that the Republican-controlled Legislature does not enact any future tax cuts.

He said that won’t occur if lawmakers support the Democrat goal of funding teacher pay hikes by adding additional revenues, whether by imposing a new levy to pay for the higher salaries or reversing some of the previously restricted tax cuts. Either method, Farley said, will keep overall spending on state government high enough not to trigger the cut in education funding.

He said the state is bringing in more dollars. And Yarbrough pointed out that the governor on Wednesday signed legislation to increase the vehicle license fee, a move he said could free up more than $100 million for state needs.