Senate votes for Amtrak funding that will save Southwest Chief 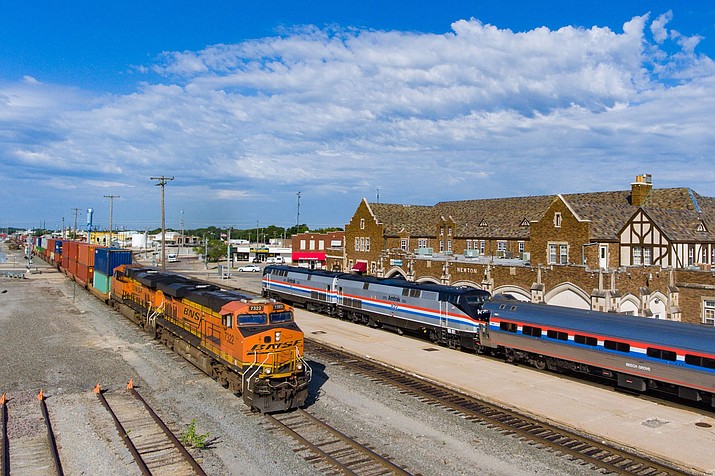 KINGMAN – The Senate voted Wednesday to pass a bill that will provide $2.5 billion in funding to Amtrak, including $50 million that will keep the Southwest Chief in operation along its established route, the Rail Passenger Association reported.

It’s a “huge victory” in turning back Amtrak’s proposal to fragment the service with a bus-bridge from La Junta, Colorado, to Albuquerque, New Mexico, said Tony Trifiletti, executive director of All Aboard Arizona.

The Senate used a House passed-vehicle to adopt the Moran-Udall amendment that’s part of a “minibus,” which means Amtrak must spend the money on the Southwest Chief and cannot discontinue the route from Chicago to Los Angeles with daily stops in Kingman, he said.

“Senators Moran and Udall went to the mat for us and they deserve special recognition,” Trifiletti said Thursday. “We’re not done yet, but it’s a big step forward. We got a real nice move forward, but we’re not there yet. We’re close.”

Thursday’s action means the bill goes into a conference committee for reconciliation. If the Moran-Udall amendment survives – which Trifiletti believes it will – it goes back to the House and Senate for a vote, and eventually to President Donald Trump for his signature.

The Rail Passengers Association has been hard at work over the past few months to ensure Amtrak’s national network remains intact.

“We could not have secured today’s win without the help of key allies in the Senate,” the association said in a blog.

The overall minibus funding bill was passed by 92-6 vote with no anti-Amtrak amendments filed, showing that the Passenger Rail Association’s work is having a positive effect.

The bill includes $1.3 billion for Amtrak’s national network, $650 million for the Northeast corridor, $255 million for consolidated rail infrastructure and safety, $300 million for state of good repair grants and $10 million for restoration grants.

“I have never taken a real train ride and have always wanted to do a cross-country train trip,” Sue Kracken said in response to a Daily Miner story about saving the Southwest Chief. She booked a trip to Maine that will require taking three trains to her final destination.