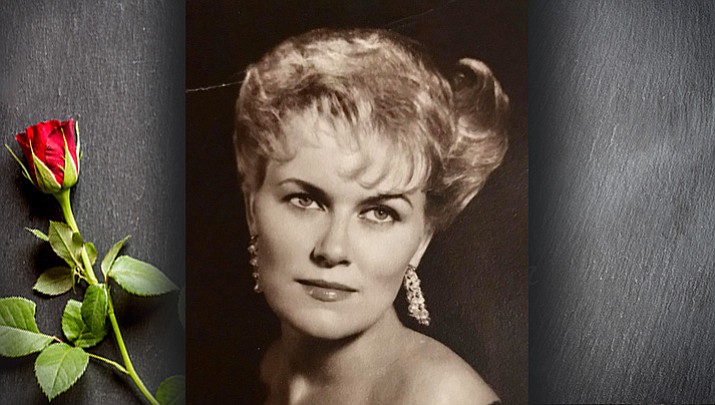 June Marie Attebery Giansoldati, 84, passed from the earthly realm and took her place with her Lord and Savior Jesus Christ on Sunday, July 29, 2018, in the home after a valiant struggle with her health.

June, the daughter of Harrel C. and Pearl Virginia (Anderson) Attebery was born July 22, 1934, in the mining town of Jerome, Arizona.

The Attebery family later relocated to Chloride where Harrel, a World War I veteran, worked in the Tennessee mine and Pearl was a housewife. The family struggled through the Great Depression but absolutely refused to let their circumstances define them.

They later moved to Kingman where June attended Mohave County Union High School and is an alumni of the Class of 1952.

June followed her passion to become a hairstylist by attending cosmetology school in Phoenix. She became a talented and highly sought after hairstylist with a large clientele.

Max and cousin William E. Negus co-owned the Stoney Wold Motel on Route 66, and later built the Negus Building (Johnson building). With Max’s building skills and June’s creativity, the couple built the beautiful LaRee Beauty Salon where many stylish coiffeurs were created throughout the years, including Debbie Reynolds’ hairstyle while she was on location filming a movie in the area. Max and June later built a second salon in the Negus Building. Sadly, in 1970 the couple went their separate ways.

In 1975, June met Roberto Giansoldati, a handsome and flamboyant Italian from Carrara, Italy, who was the general manager of the Holiday Inn Center Strip Las Vegas.

The couple was married Aug. 1, 1975. They worked together managing hotels and resorts throughout the Southwest, including Phoenix, Rio Rico, Las Vegas, Playa Del Ray, and Los Angeles.

After retiring, they returned home to Kingman to enjoy their golden years together until Roberto’s death Sept. 11, 2007.

June will be remembered for her beauty, fun-loving spirit, creativity, determination, wonderful work ethic and great love of family.

She is survived by her children, John (Lynn Thompson) Kinnie of the home, Jaynie (Gene) Hout of Springfield, Missouri; brother James Attebery of Globe, Arizona; nieces, nephews, cousins, family and many friends.