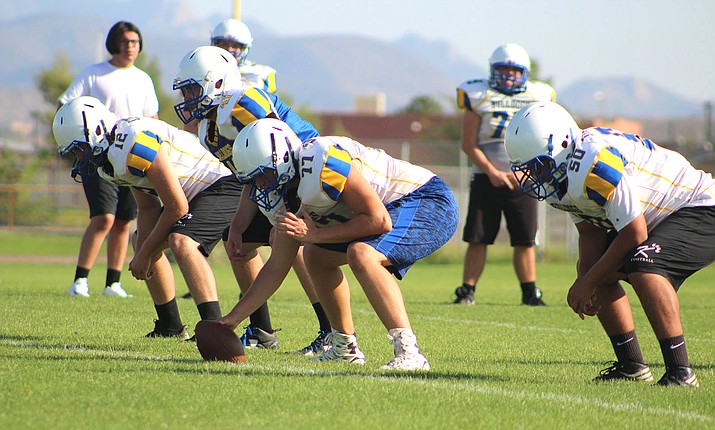 Kingman High School football players practice Tuesday afternoon at KHS. A year after the Arizona Interscholastic Association’s decision to allow year-round practices, there is still debate on the matter.

From ESPN’s non-stop coverage of college football’s National Signing Day to high school freshmen deciding to commit to collegiate athletic programs, athletes with dreams of playing at the next level are being pressured into committing to a single sport early in their athletic careers.

Last year, the Arizona Interscholastic Association legislative council passed a bylaw allowing high school coaches to hold year-round practices with their teams. The measure passed by a vote of 39-5 but prompted skepticism from coaches and media members who believed it promoted youth sport specialization, increasing the risk of overuse injuries at a young age.

“For the past five years, essentially what we’ve been doing is trying to go out and measure individuals in different specialization categories and trying to follow them and see if specialization is actually linked to injury risk,” said David Bell, an assistant professor of kinesiology, athletic training, orthopedics and rehabilitation at Wisconsin.

“And it definitely is.”

AIA Assistant Executive Director Joe Paddock, who was originally against the rule change, is still a proponent of multi-sport athletes, referencing that there is research that shows multi-sport athletes having less physical problems in the long run. But Paddock also said that the bylaw gives high school coaches more oversight with their athletes, allowing for better training supervision in the offseason.

“I didn’t see this increasing specialization any more, I saw it more as an opportunity for coaches to be with their own athletes more often during the school year,” Paddock said. “With that said, it’s up to schools to make sure it’s being used appropriately. It does put a lot of pressure on the schools to be able to step up and say no and to limit times (while) being careful with the coaches and what they’re doing with their time with the students.”

“Any school that’s not a powerhouse and doesn’t have a huge population, the success of their athletic programs is contingent on the best athletes playing multiple sports,” Brittain said. “It would really hurt small schools if that club mentality that reigns in the larger schools began to take hold.”

However, Paddock said that the new bylaw actually helps smaller schools because athletes in larger schools were already playing on metropolitan club teams during the offseason and athletes in rural, smaller communities didn’t have the opportunity to compete in a sport year-round.

“In metropolitan areas, it’s more likely that you can find a club or some other organization that your kids can continue participating in sports but in the rural communities, that’s not necessarily the case,” Paddock said. “It sounded like a fair (plan) to hopefully begin to even the playing field.”

Former Phoenix Brophy Prep football coach Scooter Molander said he was for year-round practices because it allowed more oversight by the high schools but like Paddock, stressed the importance of communication between the athletes, their parents and the school administrators in order to prevent overworking kids.

And a year after the AIA legislative council made the change, a lot of the top athletes in Arizona are still competing in multiple sports.

Scottsdale Notre Dame Prep senior Jake Smith, ranked No. 2 overall in 247sports.com’s top Arizona football recruits, said that even though his ultimate goal is to play college football, he played lacrosse to stay in shape and improve his overall athleticism.

“I think playing multiple sports and cross training is better for you mentally and physically,” Smith said. “You don’t want to get burnt out on a sport if that’s the only thing you do and playing two or three (sports) keeps it fresh. You never really get tired or bored of it.”

Smith achieved his goal, committing to play for the Texas Longhorns next year, after sharing a special moment with his lacrosse teammates in the spring. Following the Notre Dame Prep football team loss to Centennial in the 5A championship game, Smith helped his lacrosse teammates secure a second straight Division I state title. Smith credits his parents advocating for playing multiple sports in his decision to stick with lacrosse while being a heavily recruited football prospect.

“I’ve never felt that pressure (to specialize) because my parents have always been big into being a multi-sport athlete and nowadays all that I see (is) these professional sports commentators talking about how important it is to be a multi-sport athlete,” Smith said. “Also, I think it just really improves you as an athlete overall because you do different things in other sports and it helps you get used to those things.”

Paddock said the rule is still fresh and AIA’s legislative council, made up of seven representatives from each conference and six school board members, needs to take time before jumping to any conclusions about the benefits or setbacks of the rule. He also said that if the rule was to be overturned, it would need to be done by another vote from the legislative council and the only thing the AIA can do is police and enforce what the council decides is fair.

After hearing of the rule change in Arizona, Bell said he believes it could have the unintended consequence of specialization but saw the benefit of having a high school training staff on site at practices year-round for emergency situations.

“High schools are much more prepared from an emergency standpoint compared to club teams,” Bell said. “It’s really this double-edged sword. Emergency situations in high school do happen, however they are relatively rare.”

Bell also said it’s important for parents and kids to self-police their training. He offered a couple guidelines to follow in order to keep young athletes from overworking themselves in a certain sport.

“Kids should participate in organized activity no more hour per week than their age,” Bell said. “For example, if you have a 13-year-old soccer player, they should be participating in about 13 hours of soccer each week.”

He also advised taking two days off a week and if a high school athlete is going to specialize, they need to participate in an injury prevention program.

Many involved in sports in Arizona are anti-specialization, but without sufficient in-state data, the debate on how year-round practices affect sport specialization will continue. For now, coaches just hope the era of the multi-sport high school athlete isn’t over.

“To play three sports at the high school level can be done, it just requires tremendous detail,” Molander said. (It’s) very difficult to do today, (but) if it isn’t possible, well then that’s a shame.”