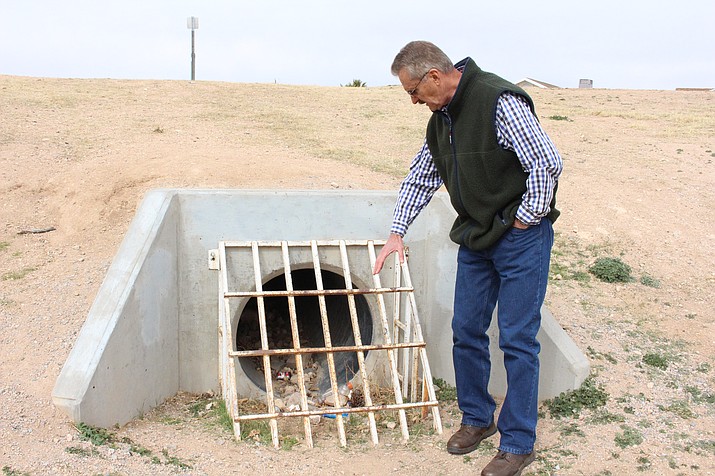 Nick Hont, former director of Mohave County Development Services, has been hired as a consultant to work on water recharge in the Hualapai Valley basin. He’s working on a project to enhance groundwater infiltration at Monsoon Park in this file photo. (Hubble Ray Smith/Daily Miner file photo)

KINGMAN – Mohave County Supervisor Buster Johnson had no problem voting for a committee to work with the City of Kingman on water supply projects, but he did not support bringing former Development Services Director Nick Hont back as a paid consultant.

He joined other supervisors Monday in unanimously approving support for the Kingman Water Sustainability Committee, which is intended to function as a working committee to coordinate work between Mohave County and the City of Kingman.

Johnson said he would support splitting Hont’s payments with the City of Kingman.

Supervisor Hildy Angius joined in the questioning of Hont’s work, asking if the part-time consultant would be doing more work and asking for more money.

County Manager Mike Hendrix said Hont is limited on the number of hours he can work, noting that he’s paid to attend meetings and was in fact being paid to attend Monday’s board meeting. He’s been accurate in reporting his work, including eight hours in the last two-week period.

Angius asked Hont at least twice how many hours he works, but never received a direct answer.

“I don’t work regular hours. I work pretty much as needed,” Hont responded. “The only work I really do is under supervision of County Manager Hendrix related to groundwater issues mainly. What I’ve been doing is creating projects. I’m working closely with the Flood Control District and we have created about a dozen projects. Some of them are already designed, some of them are conceptual designs.”

Hont said he met with the Kingman city manager and agreed to be on the committee as long as it didn’t create extra work. It hasn’t been decided when or how often the committee will meet.

The City has some projects on its own, including a conceptual design to recharge treated wastewater that could provide about 20 percent of the city’s annual water needs, Hont added.

“Mr. Hont, now that you’re on a fixed income … my thing is we’ve hired Mr. Hont to do jobs and come up with projects that he’s helping the county with,” Johnson said. “Having him sit in meetings when we could have our staff that’s paid to sit in meetings … I want results from Mr. Hont and I don’t think him sitting in meetings is the best use of county tax dollars. I know he loves meetings.”

The scope of the committee’s work is to identify resources and funding of projects that will promote sustainability and resiliency of the Hualapai Valley groundwater basin.