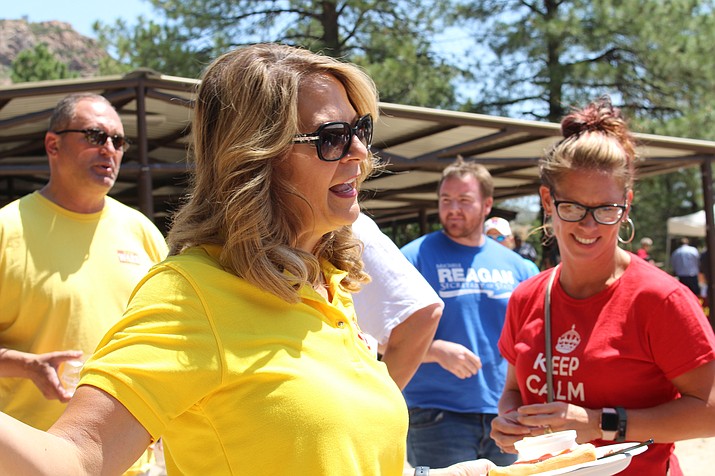 Kelli Ward has launched a website, MarthaMcFake.com, which Ward says documents McSally’s record of flip-flopping on issues. Ward was also at the Mohave County Republican picnic on July 28 where she allegedly grabbed a campaign pin that was given to opponent Joe Arpaio by one of her volunteers and threw it to the ground, but inadvertently hit Arpaio’s director of communications. (Photo by Vanessa Espinoza/Daily Miner)

The website, MarthaMcFake.com, documents McSally’s record of flip-flopping on issues. It highlights McSally’s “double dealing” with a chart of comments before and after she announced her Senate campaign.

Before her campaign, McSally complained that President Donald Trump’s tweets were creating troubling “distractions,” and “it’s basically being taken out on me. Any Republican member of Congress, you are going down with the ship.”

After she announced she would run for the seat being vacated by Sen. Jeff Flake, she said, “Sure, absolutely I have a great relationship with the President.”

Earlier this year, McSally boasted about how “proud” she was to support the budget-busting omnibus bill, only to retract her statements following conservative outrage, said Zachery Henry, press secretary for Ward.

“But viewed in context, McSally’s hasty assent to the outrageous $1.3 trillion spending bill came after her support of a very long line of debt-expanding legislation,” he said.

“Martha McSally is no conservative,” Henry added. “It takes only a brief review of her voting record to discover this fact – one that stands in contradiction to her many claims on the campaign trail.”

McSally changed her stance on immigration reform and on her views of President Trump. As a Congresswoman, she voted for amnesty on several occasions, refusing to support Trump’s proposed border wall. She also opposed the president’s “America First” immigration proposals.

“She was simply citing the Arizona Republic and other newspapers that supported candidates who do support open borders like (Sen. John) McCain, Flake and McSally,” Beach said Tuesday during an interview with the Daily Miner.

“Her concern and call to action is that voters can’t be duped again when candidates say they’re pro-border control when they’re not. Hopefully people can see through that.”

Arizona Republic’s tweet about its editorial board meeting with Senate candidates said nothing about endorsements, Beach added.

“We weren’t even going to show up. We know their pattern. They push their own agenda. They supported Hillary Clinton. Voters ought to be aware of that open-border agenda.”

Beach also criticized a story about an incident at the Mohave County Republican picnic on July 28 at Hualapai Mountain Park in which Ward allegedly grabbed a campaign pin that was given to opponent Joe Arpaio by one of her volunteers and threw it to the ground, but inadvertently hit Arpaio’s director of communications.