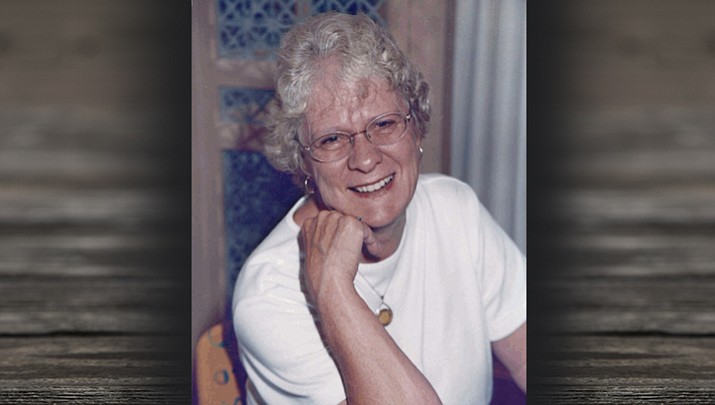 Shirley Stronge, age 82, died on Monday, Aug. 6 at about 9:50 p.m. while sleeping peacefully. She was able to see her children and many friends in the days before she passed. She was born Sept. 2, 1936 in St. Paul, Minnesota.

She came to Arizona in 1977 and married Pete in 1979 living in Mohave Valley and becoming a railroad man’s wife. In 1987 they moved to Pine Lake, near Kingman, for their retirement home.

During her life in Minnesota she was, in addition to a housewife and mother, a dance instructor for Arthur Murray studios, telephone operator, and a retail clerk and shift supervisor for a group home. She sang with the Sweet Adeline’s in her copious spare time. In Mohave Valley she worked as a short order cook, receptionist and an aide for handicap students at the Little Red School House in Bullhead City. She square danced for many years.

Upon arriving in Kingman she quit work and took up volunteering. Shirley was the head coach for Kingman Special Olympics Bowling for over 15 years and played tennis until her knees and wrists gave out. She also served on the Board of the Pine Lake Fire Department, helped with the Auxiliary and was a clerk at the voting polls in Pine Lake. She donated many hours helping the Homeowner’s Association.

In her spare time she bowled, going to Nationals for over 10 years, belonged to several Red Hat groups and went on many travels with them. She also enjoyed traveling with her husband and took many air, road and cruise trips.

Shirley was diagnosed with Parkinson’s and as it progressed, one by one, her activities decreased to the point where her social life was the doctor and therapy visits.

She will be cremated and her remains taken on a road trip for far-flung relatives and friends, she always liked traveling and visiting. After that she will be placed on top of the fire-stove, per her request, as she never could get quite warm enough.

She has had private services in Kingman.

Shirley’s family wish to thank both La Bella Assisted Living and KRMC Hospice for all the help and kindness from the KRMC Parkinson’s Group who helped in many ways.

Our generous, caring, helpful and loving Shirley Stronge has left our world to join the angles and is being welcomed by her parents; Lawrence and Myrtle, her children; Larry and Melisa, and her Brother Bob.

She will be missed but never forgotten by the many she touched.