The reporting party told dispatch that a male subject in a white truck was running over his fence and trees. While responding to the residence in the 7500 block of Shipp Drive, deputies observed a white truck and conducted a traffic stop. The driver, later identified as Crabtree, was detained and told deputies he went to the residence to look for his girlfriend and that he wouldn’t leave until he found her.

Deputies saw the driver’s side of the truck was broken and pushed in. The victim told law enforcement he had never met Crabtree and didn’t know the girlfriend. He also told deputies he witnessed Crabtree running over trees before he left the property, returning 10 minutes later. The victim then said he got in his truck and attempted to block Crabtree from hitting more of his fence, at which time Crabtree backed up and hit the truck.

Damage to the truck and fence is estimated at about $13,000.

Crabtree was arrested for aggravated assault with a deadly weapon and criminal damage, both felonies, and driving with a suspended license and reckless driving, both misdemeanors. He was booked into Mohave County jail.

Jessica Lyn Johnson, 28-year-old Topock resident, was arrested by Mohave County Sheriff’s Office deputies Friday after becoming nervous when asked about the contents of a plastic baggie protruding from the top of her shirt, which reportedly contained 1.2 grams heroin.

Deputies conducted a traffic stop upon observing a vehicle without a working license plate light. When they made contact with the driver, later identified as Johnson, law enforcement noticed a plastic baggie sticking out from the top of her shirt. When asked what it was, the Sheriff’s Office reports that Johnson became increasingly nervous as her hands began to shake. She then told deputies it was a part of her shirt.

Deputies asked her to remove the item, and she handed them a bag containing a black tar-like substance. According to law enforcement, that substance tested positive for 1.2 grams of heroin. Johnson was arrested for a felony narcotic drug violation and was booked into Mohave County jail.

Robert Allen Grove, 45 of Fort Mohave, was arrested Sunday when Mohave County Sheriff’s Office deputies pulled him over for lack of a working license plate light, and then discovered he had two active arrest warrants.

Deputies pulled over Grove’s gray vehicle, which was traveling east on Corwin Road, once they realized it did not have a working license plate light. A records check revealed two active arrest warrants and Grove was detained and placed in the deputy’s vehicle. He gave deputies permission to search his car, and according to law enforcement, admitted to having marijuana in the center console.

Deputies searched the vehicle and found 1.3 grams of marijuana, 2.3 grams of methamphetamine and three glass pipes. Grove was arrested and booked into Mohave County jail on two counts of marijuana violation, dangerous drug possession and drug paraphernalia violation, all felonies, in addition to the two active arrest warrants. 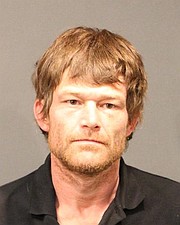 Kingman Police Department arrested Matthew Edward Dach, 40, of Kingman, during a traffic stop in the 3600 block of Stockton Hill Road at 2:40 a.m. Saturday.

During the traffic stop, officers learned Dach’s driving privilege was suspended. After Dach was taking into custody, police say a search revealed a handgun, which he’s a prohibited possessor, and drug paraphernalia associated with marijuana and methamphetamine use.

Dach was booked into the Mohave County Adult Detention Facility on felony charges of weapons misconduct, possession of drug paraphernalia, and a misdemeanor charge of driving on a suspended license.

Kingman Police Department officers arrested Sonny Lee Clark, 38, of Kingman, on Saturday when an off-duty officer reportedly observed Clark attempting to break in a coin box of a vacuum machine.

The incident occurred at 3:05 a.m. Saturday at a convenience store in the 2200 block of Hualapai Mountain Road.

On-duty officers responded to the scene and said Clark attempted to flee on foot. Clark was captured and he was found to be in possession of a lock pick, narcotic drugs, methamphetamine, and associated drug paraphernalia.

On July 24, detectives received information regarding the possible molestation of a child. The reporting party advised the child had told him about a situation involving Moran, who is the roommate of the child’s parents, which involved inappropriate touching of the child.

The reporting party advised when they told the child’s parents, the parents confronted Moran about it. Moran “broke down” and allegedly confessed to the inappropriate touching.

Moran was booked into Mohave County jail. Future charges may be added as the investigation continues.

Robert Wayne Romero, 40, of Kingman, was arrested Tuesday for unlawful flight from law enforcement, theft of means of transportation and two active warrants.

Deputies responded to a call of an armed male subject who allegedly threatened another person, and observed a white pickup truck described in the call.

They tried to stop the truck, but the driver continued traveling at a high rate of speed, turning onto Stockton Hill Road toward Pierce Ferry Road.

Deputies discontinued their pursuit due to the speed and called in the Department of Public Safety Ranger helicopter. The truck was spotted in the area of Diamond Bar Road, heading toward Grand Canyon West.

Shortly thereafter, DPS reported the truck had turned around and was headed back toward Pierce Ferry Road. Deputies attempted another traffic stop on Pierce Ferry, but the truck continued on through Dolan Springs, turning south on U.S. Highway 93 toward Kingman.

The helicopter followed the truck to the area of Gordon Drive and Stockton Hill Road. During their pursuit, deputies got close enough to identify the driver as a man wearing a white shirt and appearing to have a goatee.

DPS reported the truck had stopped at a home in the 2100 block of Lass Avenue. Deputies arrived and saw the truck was unoccupied. They told him to come out of the home, which he did. A records check showed Romero had an active arrest warrant, and the truck had been stolen.

A Kingman pair was arrested on their sixth attempt of shoplifting at a local business.

Allen Ray Daniel, 56, and Laura Jean Zimmerle, 54, both of Kingman, were alleged suspects in numerous shoplifting incidents that occurred at a business in the 3300 block of Stockton Hill Road over the last few weeks.

Kingman Police Department reported it caught the duo on their sixth attempt at 7 p.m. Thursday after they were observed shoplifting.

Police say that when taken into custody, Daniel was reportedly found in possession of methamphetamine and associated drug paraphernalia. Stolen merchandise was recovered from Daniel and Zimmerle, and from their home. Both admitted involvement in the offenses, according to KPD.

Zimmerle was charged with felony shoplifting, trafficking in stolen property and a misdemeanor warrant for contempt of court on an unrelated domestic violence charge out of Lake Havasu City.